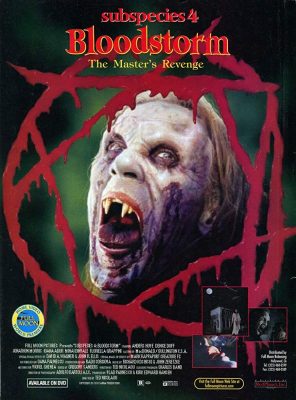 I’ve got to say, I’ve really enjoyed the three previous chapters in the series.  Are they the very best vampire flicks I’ve ever seen?  No, but it’s worth mentioning that Full Moon Features specifically seemed to try to have some idea of consistency (aside from one piece that I will get to momentarily), and some considerable effort while filming the movies in Romania to add the appropriate flavor to the whole thing.  Additionally, each of the four actual Subspecies flicks were directed by the same guy, Ted Nicolaou, primary villain Radu was played by the same guy, Anders Hove, each time around, and Michele was played by Denice Duff in three of the four films.  That’s consistency that you don’t often find in a lot of direct-to-video horror.  Hell, you may not even always find it big budget horror in the 80s or 90s.

But before we get into 1998’s Subspecies 4: Bloodstorm, we need to do a little bit of housekeeping. END_OF_DOCUMENT_TOKEN_TO_BE_REPLACED 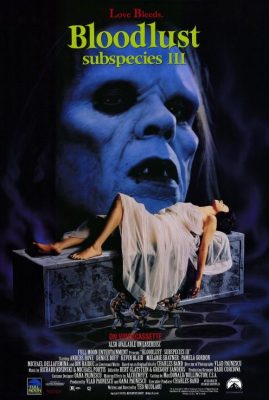 Welcome back to Subspecies Month here at B-Movie Enema.

Full Moon Features had a certified hit on their hands with the first Subspecies film.  The second, Bloodstone: Subspecies II, while leaving me with a whole bunch of questions (not the least, “Where are the Subspecies?”), was still fairly decent.  It wasn’t as good as the first, but was far from some of the really bad cash-ins Full Moon tends to do later  in the 2000s.  The one thing the sequel did, was leave us with a cliffhanger.  Last we saw, Michele (Denice Duff) had seemingly defeated the evil Radu (Anders Hove), but needed to stay behind in a crypt out of the sunlight before being able to leave with her sister Becky (Melanie Shatner).  However, Radu’s mother and beef jerky person, aptly named Mummy, snatched Michele and drug her back below into the crypt for who knows what.  We were teased with a coming soon title card that reminds many of the era of how Back to the Future II teased Back to the Future III.

So, here we are, it’s time for Bloodlust: Subspecies III! END_OF_DOCUMENT_TOKEN_TO_BE_REPLACED 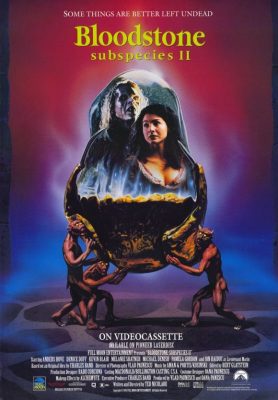 With Subspecies being another hit for Full Moon Features, it was clear that a sequel was indeed needed.  So, two years later, Full Moon released Bloodstone: Subspecies II picking up directly after the conclusion of the first chapter.  Because this is being featured on this blog, and the dreaded specter of the Angel series still haunting me, you better believe there are casting changes here.

(And yes, that Angel specter is still constantly reminding me there is a fourth film I have yet to cover.  It haunts my dreams, man.  It’s a constant reminder of my failings in life.  This devilish Angel will not be appeased until I finally cover it.  Just hold tight and I will get there in time.  In fact, sooner than you know.) END_OF_DOCUMENT_TOKEN_TO_BE_REPLACED

It’s been a little bit since I really dug deep into some vampires for an extended period of time.  It’s also been a while since I looked at a movie from Full Moon Features.  So, how do I propose to fix that?  BOOM! A whole month of Subspecies movies!

So here we are, the 1991 Full Moon feature, Subspecies, starring Anders Hove, Laura Tate, and the beloved Angus Scrimm.

Let’s think of the title of this series for a moment – Subspecies.  As a word, it indicates that there is a species that are, I dunno, like living below other species.  You know, SUBspecies?  Well, yes, this is a vampire movie.  Yes, it mostly takes place in the Carpathian Mountains.  That means this nebulously revolves around the legend of Dracula.  But what makes this movie a little different is the title creatures themselves – the Subspecies.  These are little goblin guys who serve our lead vampire, Radu (Hove). END_OF_DOCUMENT_TOKEN_TO_BE_REPLACED