B-Movie Enema has reached the end of Lina Romay Month!

Every. Single. One. Of. These. Movies.

But now, it’s time for Shining Sex. This is about an exotic dancer (Romay), who is seduced by an alien from a different dimension named Alpha and her human slave. They come to learn about the sex. Meanwhile, Jess Franco is also in the movie playing a guy who’s all about the paranormal. It’s one of the few times that Franco went into things like the paranormal and science fiction. So, I suppose you can say we’re in for a real treat for this final entry in this theme month! But before we dive into the movie, we should probably see what Severin has to add from the back of their Blu Ray release of this exploitation classic…

END_OF_DOCUMENT_TOKEN_TO_BE_REPLACED

Let that set in. SIXTEEN MOVIES. Quentin Tarantino won’t make 16 movies in his career. Okay, sure, one or two of them were not directed by him, but he produced and/or wrote them. What the fuck ever. He was making more than one movie a month. Okay, sure, most of them didn’t have much of a budget, or much of a costuming department, or a story. What the fuck ever. He was plowing through movies on his way to his most productive year in his incredibly productive career.

So, in February of 1983, he released one of those 16 flicks in Spain – Night of Open Sex. This is our fourth entry in Lina Romay Month here at B-Movie Enema, and this one might be a doozy. You see, Night of Open Sex isn’t quite like the previous entries this month. Oh no. This movie is actually a Eurospy thriller comedy caper. How does any of that work? I dunno, but here we are.

END_OF_DOCUMENT_TOKEN_TO_BE_REPLACED 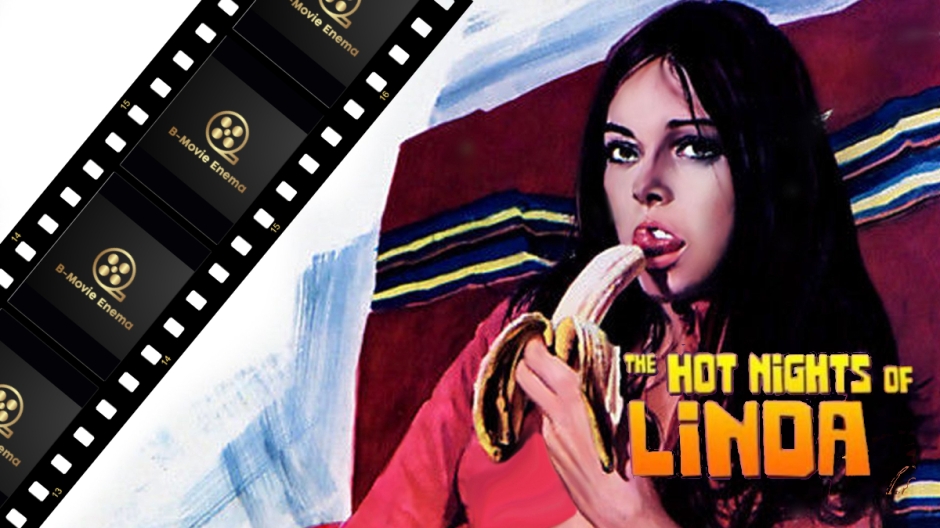 It’s still Lina Romay Month here at B-Movie Enema and this week, it is time for to put away the Marquis de Sade and all the really weirdo sex stuff for something that has a bit more in the way of lesbianism (ooh!), murder (okay, you have my attention)… incest (uh oh)… and sadism.

END_OF_DOCUMENT_TOKEN_TO_BE_REPLACED

Well, buckle up, kiddos… This week’s B-Movie Enema is Sinfonia Erotica. Another Jess Franco/Lina Romay joint. Another Marquis de Sade story turned into a filthy little Spanish movie. However, what are we looking at in terms of “filthy”?

Will this be like last week? Well, that’s hard to say. In Cries of Pleasure, about half the movie was full of our main sex weirdos completely nude and doing various sex with each other. I’m pretty close to 100% sure there was actual sex being performed during the filming. While we didn’t see the actual penetration like we did in some of the past adult films I’ve covered on here before, that doesn’t mean it didn’t happen.

What might be key to note here is the year in which Cries of Pleasure or Sinfonia Erotica were release.

END_OF_DOCUMENT_TOKEN_TO_BE_REPLACED

This month, B-Movie Enema is going to dive into some Lina Romay movies. Ms. Romay was kind of interesting in her own right. Maybe made more interesting by the man she served as muse to – Jess Franco. Now, I’ve covered one of their movies before – Two Female Spies with Flowered Panties. We’re doing it again with this week’s look at 1983’s Cries of Pleasure. I delved into a little bit of their relationship with Two Female Spies, but I think it might be a good idea to review that as we jump into this month that features a bunch of stuff from them.

Franco had been inspired by (and infatuated with) Soledad Miranda in the late 60s. The pair made a few movies and he saw her as the only possible star for his films. She tragically died in an automobile accident in 1970. A destroyed and heartbroken Franco would soon find his new leading lady in the teenaged Lina Romay. She was married at the time, as was Franco, but as they continued to work on numerous projects and spent much time together, they soon were inseparable. By the end of the 70s, Franco and Romay were living together, and would until the end of her life in 2012. Franco passed away about 14 months later.

The duo made dozens of movies together during his heyday of the 70s, through his downturn in the 80s, and even some of his adult films in the 90s.