B-Movie Enema’s October 2020 theme of Exorcist Rip-Off Month is back, and this time we got a pretty well-regarded one.

This week’s film is Abby, and it’s best described as one of the handful of blaxploitation horror films alongside Blacula, Blackenstein, Dr. Black, Mr. Hyde, and Ganja and Hess.  This was part of a trio of blaxploitation films by William Girdler.  One of those, Sheba, Baby, will someday be on this blog because I LOVE blaxploitation.  I’ve talked about Girdler before, though.  He’s probably best known for making Grizzly in 1976.  However, his final film, The Manitou, dealt with Native American themes and was something I covered over at Film Seizure on my Monster Mondays show earlier this year.

Abby isn’t without some prestige, though.  It stars Carol Speed who was in several exploitation films of the 70s, and Blacula himself, William Marshall!  It also has Academy Award nominated actress Juanita Moore.  So it is not at all lacking in talent here. END_OF_DOCUMENT_TOKEN_TO_BE_REPLACED 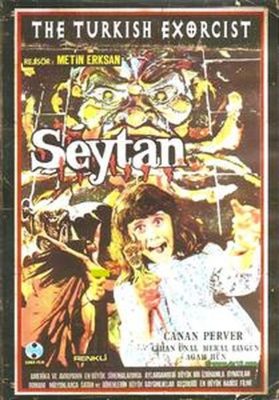 Welcome back to B-Movie Enema and my Exorcist Rip-Off Month!

Say!  Remember last week when I said that I couldn’t just write about The Exorcist because I’d probably be run out of town for having a blog called B-Movie Enema and doing movies that aren’t just A movies in money, but also in quality?  Yeah, well fuck that.  I found a way to do it.

For this week’s movie, I’ll be digging right into the shitty bowels of 1974’s Seytan from Turkey.  Seytan is pretty much a direct copy of William Friedkin’s masterpiece The Exorcist in just about every way it possibly can be.  It’s a little shorter, but I remember the first time I ever saw Seytan, I kept looking at the screen and thinking…  “Is the audio just fucked on this movie, or what?” END_OF_DOCUMENT_TOKEN_TO_BE_REPLACED

It’s October!  It’s the spoooooookiest month of the year!

In years past, I generally would find some sort of loose theme to tie all the movies covered in the month (with usual exception to the actual Halloween “special” article).  This year is no different!  This is B-Movie Enema and that means I can’t do no movies like The Exorcist or its sequels.  They are hardly “B” in quality of production, even if Exorcist II really fucking tried pretty hard.  I can, however, do the next best thing.

Welcome to the 2020 October theme month I’m calling Exorcist Rip-Off Month!  We’re getting things started with Mario Bava’s Shock from 1977.  Here’s the thing about Shock…  It’s a possession movie, yes.  However, it may only be an Exorcist Rip-Off in sort of name only.  You see, Shock was released in the United States as Beyond the Door II.  Beyond the Door was a 1974 rip-off of The Exorcist and a B-Movie Enema alum.  I really really really needed to cover this. END_OF_DOCUMENT_TOKEN_TO_BE_REPLACED 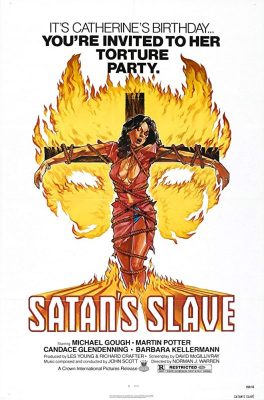 If you’ve been around the site for a while, you know I’m a fan.  Prey is a good little home invasion story that is wrapped up in an alien invasion story – that also features lesbians.  Terror is a fun supernatural flick that has a vengeful witch – that may or may not have included a near miss for a fat guy on a train to have sex with a really pretty British lady.  Bloody New Year is just…  Well, it’s just bonkers, silly fun – that also happens to include an experimental plane that broke time and space.

Satan’s Slave is the first horror film that Warren made that pre-dates all of the above mentioned greatest hits.  As it turns out, it’s not the first of his films I covered in 2020 and it won’t be the last.  That said, I should maybe hold up because I’m quickly running out of his movies! END_OF_DOCUMENT_TOKEN_TO_BE_REPLACED

It’s a new B-Movie Enema and, this time, Don’t Answer the Phone!

By 1980, there was a weird feeling in the country.  The 70s were pretty tumultuous with the Vietnam War and President Nixon leading to many feeling they can’t trust the federal government.  The entire decade felt as though the counter culture was putting their stamp on the new Hollywood, but that was about to come crashing down.  Indie exploitation was about to be scrubbed away by the religiously-charged, great white hope of the Reagan era.

One of the things that would play out for the next 20-25 years after the conclusion of the Vietnam War would be the psychological damage of the vets that returned home.  Whether it was by way of dramatic films like Coming Home and The Deer Hunter, or action films like the Rambo series, Vietnam vets played a huge part in many films.  But there was also a darker side to it as well… END_OF_DOCUMENT_TOKEN_TO_BE_REPLACED

Hello and welcome to B-Movie Enema.  This week, I’m gonna discuss something I’ve wanted to do for a while – Tobe Hooper’s 1990 made-for-television thriller I’m Dangerous Tonight.

Now, the easy joke here is to say that “I’m Dangerous Tonight” is something I’d exclaim after a Crave Case of sliders from White Castle, but…  Actually.  Wait.  That’s a pretty good one.  I’m pretty bummed I didn’t lead with that.

Eh…  Never mind.  There’s a lot here I could discuss.  You have Tobe Hooper in the director’s chair.  The fact this was a TV movie and not a cinematic release.  Mädchen Amick lookin’ gooood.  Anthony Perkins is right there on the poster…    Yeah.  I guess I can go with other things than a farty poop joke. END_OF_DOCUMENT_TOKEN_TO_BE_REPLACED

It’s another week here at B-Movie Enema and I think I worried I went too long before covering another Vinegar Syndrome release.

So I’m here to fix that with this week’s movie, Party Line!  This 1988 flick had a provocative cover of a sexy girl in lingerie with a phone line wrapped around her leg and torso.  It was a memorable movie cover to see in the suspense/thriller section of the video store.   The movie basically plays to the 80s exploitation of sexy thrillers.  This was perfected probably best in the 90s with movies like Basic Instinct, but these little indie flicks toyed with the idea of mixing sex with murder.

This flick features a rich brother and sister psycho combo.  She lures men through a party line on the phone for her brother to kill them.  You have Richard Hatch playing a detective who is going after the killers.  And then there’s Richard Roundtree playing Hatch’s captain. END_OF_DOCUMENT_TOKEN_TO_BE_REPLACED

It’s another Friday, so that means NEW B-MOVIE ENEMA DAY!

This week, I have something a little more recent and from a group I’ve come to greatly appreciate.  The Sleeper is a 2012 slasher/thriller from Gamma Knife Films and Scream team Releasing.  It was written and directed by Justin Russell.  It’s meant to emulate the style of low budget slashers than ran wild after the release of 1978’s Halloween and 1980’s Friday the 13th.

Quite frankly, the 80s are in right now – in a BIG way.  More on that shortly.  First, though, let’s talk about Scream Team Releasing. END_OF_DOCUMENT_TOKEN_TO_BE_REPLACED