Gather ’round, kiddos. On this Christmas Eve, hear this tale of horror that was unleashed onto the world one day shy of a fortnight before Halloween in the year 1991. Yes, it was said that this creature would stalk only the flyest of small town honeys. It was said you could hear him coming as the wind would whisper:

“Alright stop… Collaborate and listen… Ice is back with my brand new invention.”

It is then, when you realize something will grab a hold of you tightly. It shall flow like a harpoon daily and nightly. Will it ever stop, you wonder… Yo, I don’t know.

You are now in the grasp of Vanilla Ice, and you will be Cool As Ice.

END_OF_DOCUMENT_TOKEN_TO_BE_REPLACED

This week, we have something that isn’t too common a thing around these parts – a movie loosely based on a real life event. The Candy Snatchers is a 1973 exploitation cult classic about a trio of kidnappers who snag a girl and ultimately bury her alive while waiting for their ransom to be paid. We’ll go into more about the actual movie in just a moment. First, I want to talk about the real world connection this movie has.

In 1968, college student Barbara Mackle was sick during the 1968 flu pandemic at a motel in Georgia waiting for her mother to pick her up so she could care for her at the family home in Florida. Someone knocked on the door of the motel wearing a policeman’s cap. This man claimed her boyfriend (and later husband), was in a terrible car accident and was injured. Mackle let the “officer” in, but it was actually Gary Krist and accomplice Ruth Eisemann-Schier (posing as a man). The couple kidnapped Mackle and buried her in a ventilated box outside Duluth, Georgia while they attempted to collect ransom. After three days of being buried alive, Mackle was recovered after Krist left a tip with vague directions on how to find her. Aside from pretty bad dehydration, Mackle was alive and went on to show no other ill effects of being kidnapped. Krist and Eisemann-Shier were both arrested later, Esimann-Schier was deported to her native Honduras after spending 4 years in prison and Krist spent the next 40+ years in and out of prison.

While there is much more to learn about the Barbara Mackle kidnapping, one more item of note, Ruth Eisemann-Schier was the first woman to ever appear on the FBI’s Top 10 Most Wanted list.

END_OF_DOCUMENT_TOKEN_TO_BE_REPLACED

This episode is available only at the website or Vimeo, but you can still subscribe to the B-Movie Enema YouTube Channel for the other videos and episodes!

B-Movie Enema: The Series runs away and joins the carnival, but uh-oh… There’s a gold digging lady with a very specific prejudice in 1967’s She Freak!

Scream Blacula Scream! And that’s exactly what Geoff and Nurse Disembaudee watch on this week’s new episode of B-Movie Enema: The Series!

Hey hey we’re B-Movie Enema and in this episode, Geoff talks about one of his favorite things, The Monkees, thanks to Micky Dolenz starring in The Night of the Strangler.

One look at the trio of stars that grace the promotional materials for this movie, and you might think that I chose this for B-Movie Enema because that’s Gary fucking Busey in clown makeup. If not that, maybe it’s burlesque dancer Jodie Foster. Both of those are good choices, but, alas, I chose Carny for one reason…

It’s my fuckin’ blog and I chose what I want.

Seriously. Get off my back. I want to watch a movie with good, non-weirdo Gary Busey playing a carnival barking con man and a young sexy Jodie Foster exotic dancing. I don’t know what the fuck you think you have to say that is any better of an idea. To be honest, I’ve wanted to do either this or Bugsy Malone for a long time on the blog. I really have no idea why. Bugsy Malone is easy to explain because it’s a kid mobster musical movie. That screams fun to me. Carny… Well, this one seemed a little more serious. A little more like it maybe has something to do with these young, talented actors.

END_OF_DOCUMENT_TOKEN_TO_BE_REPLACED 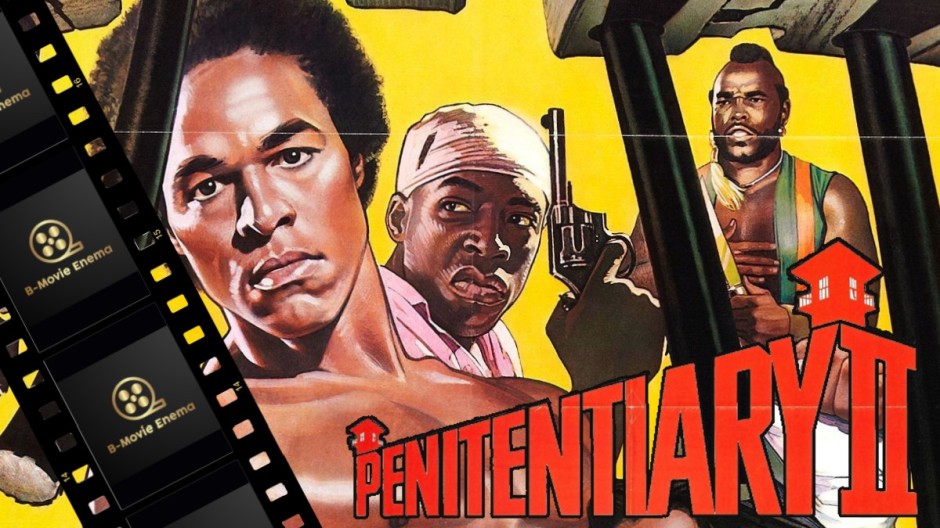 Let’s go back to the story of Martel “Too Sweet” Gordone for this week’s new B-Movie Enema.

Some time ago, I covered the first story in Too Sweet’s trilogy. This week, we pick up where the last left off with Penitentiary II. As seen at the end of the first film, Too Sweet won the prison boxing tournament and was released. However, there’s a bit of a caveat with that freedom as we’ll see in this week’s sequel.

As with the first, Penitentiary II is written and directed by activist and leading member of the L.A. Rebellion, Jamaa Fanaka. Fanaka would ultimately make three films in the saga of Too Sweet Gordone. However, this film has a couple other notable actors appearing in it.