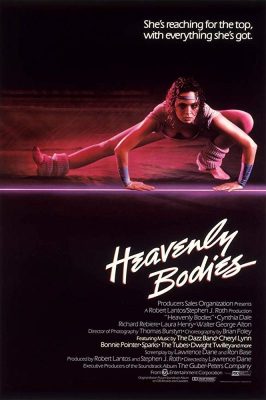 Pull up a chair kiddies, and let me tell you the tale of 1984’s dance-ercize epic Heavenly Bodies.

And, besides, summer is coming – it’s time to make sure you got your beach bods ready for the sun and fun of the warmer weather!  Heavenly Bodies is about Samantha Blair, played by the incredibly cute and likable Cynthia Dale, who is an aerobics instructor at a Canadian fitness club named, well, Heavenly Bodies.  She soon finds herself in the battle of her life as she competes against one of the lead instructors at a mega fitness club chain for a spot on a local television workout show.  This brings her face-to-face with big wig bullshit and the only way for her to fight and defeat the evils of capitalism is to dance the fuck out of it. END_OF_DOCUMENT_TOKEN_TO_BE_REPLACED

And here we are, the final entry for the Ilsa She-Wolf of SSeptember theme month at B-Movie Enema.

Thus far, we’ve seen Ilsa run a Nazi concentration camp, a sheikh’s harem and sex slave trade… warehouse(?), and a psychiatric hospital in (probably) Spain.  Now, we turn back the clock to 1953 Soviet Union.  Here, Ilsa runs a gulag in Siberia for political prisoners where she breaks them mentally and physically.

We’re back for round 3 of Ilsa She-Wolf of SSeptember Month here at B-Movie Enema.  Last time, I mentioned that this week’s installment, Ilsa, The Wicked Warden, was a bit of the redheaded stepchild of the series.  It’s not because Ilsa is a redhead this time around (I mean… yes that too), but it’s really because this movie was never meant to be a part of the series.

The first two, as well as next week’s installment, were legitimately made to all be about a ball-busting chick (sorta) named Ilsa who ran a prison camp or a harem.  This was actually meant to be entirely separate.  This film was legitimately filmed to be like those other women in prison, sexploitation flicks and be marketed overseas.  What better way to sell them than to have Dyanne Thorne be your villainess?  And how do you give it more of the European flavor? END_OF_DOCUMENT_TOKEN_TO_BE_REPLACED 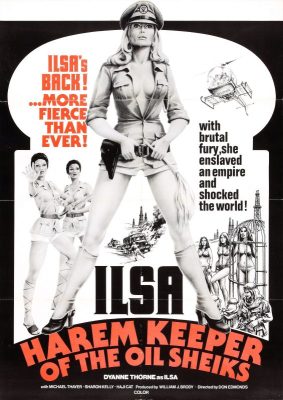 I know what you’re thinking though…  “Geoff, I read your B-Movie Enema blog loyally every goddamned week.  I thought Ilsa died at the end of her first movie?  What the fuck gives you pencil dick fuck nugget?”  (Yes, I know that is exactly what you, my dear readers, say about me.)   END_OF_DOCUMENT_TOKEN_TO_BE_REPLACED

Welcome to Ilsa, She-Wolf of SSeptember Month here at B-Movie Enema.  What the hell does that mean?  Well, over at Film Seizure, I’m co-hosting a month of sexy thrillers called Sexy September.  What better way to compliment that than to have a scumbag version of the same theme over here?

And, if I’m going to do that, there’s only one way to make it really scumbaggy…  Nazisploitation.

Nazis are evil sons of bitches.  They are basically the lowest form of person to have ever lived.  While I’m sure it can be argued exactly how many people in the German population between 1933 to 1945 were true blue believers of the horrific ideals of Adolf Hitler, there’s no better movie villain ever than those damn scuzzy fuckin’ Nazis.   END_OF_DOCUMENT_TOKEN_TO_BE_REPLACED

If I’m gonna do a bunch of Roger Corman movies, it is high time I return to the realm of the Great White North.  So, here we are again with another Canadian horror movie.  This also bring us back into the world of good ol’ fashioned rock and roll horror with demons and shit.

This is the second time I’ve gotten into some Thor with Zombie Nightmare being the first of these treasures of cinema.  Like the treasures you pick out of your nose.  These movies are boogers. END_OF_DOCUMENT_TOKEN_TO_BE_REPLACED 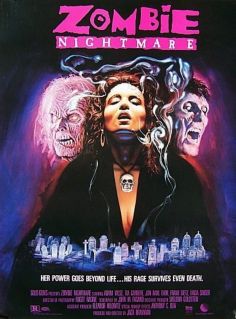 Since returning from hiatus, I’ve written about a Canadian movie and a movie from 1987.  This week, I cover a 1987 Canadian movie.  Huh…  Funny how things work out.

Zombie Nightmare is one of those flicks that marries heavy metal and horror.  I’ve touched upon this before with Black Roses – which also happens to be a Canadian horror movie.  However, this one has a few very distinct reasons for why I wanted this on the blog.

First, this is a Mystery Science Theater 3000 alum.  It’s a pretty solid episode as well.  Second, our star, Jon Mikl Thor, had this and another movie with “Nightmare” in the title from 1987 that just simply need to be here on B-Movie Enema.  Finally, it was one of the final six movies to be looped on Bizarre TV before the Roku channel’s original owner, Ronda Baffes, passed away.  Bizarre TV was such a huge part of how I was able to get this far with the blog, I feel like I owe it some continued love. END_OF_DOCUMENT_TOKEN_TO_BE_REPLACED 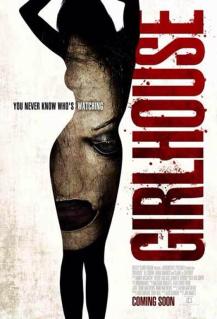 Looks who’s back in this shit saddle again!

Welcome to the 101st B-Movie Enema entry.  After spending the better part of the last, like, three months on hiatus while another project I’m a part of, Film Seizure, was launched and sailed on its own, I’m ready to come back home and begin the next hundred Enemas by returning to my bread and butter: Girls, Slashers, Dumbness, Canadian Horror, and Girl Boobs.

So, that brings us to 2014’s Girl House directed by Trevor Matthews.  And I bring that up because I first saw this movie on one of the Showtime channels called Showtime Women.  They had this bumper before the movie talking about movies made by women for women.  So I thought, “Oh, okay, a lady made this movie.  That might bode well.”  But it is directed by Mr. Matthews, written by Nick Gordon, and produced by Matthews, Gordon, and Cory Neal – a guy who is so much a guy, he has two guy first names as his full name.  It is also shot and edited by guys too.  That’s odd, but maybe the movie is about something that would be geared toward women, that would be… END_OF_DOCUMENT_TOKEN_TO_BE_REPLACED