It’s been a bit since I did an anthology movie.  In fact, I’ve only ever done one in the past.  So let’s make up for that with a giant, nearly two full hours of kooky b-movie stories rolled into the horror comedy Chillerama from 2011!

The four segments contained within Chillerama are framed by a connecting story at a drive-in theater that is playing monster movies.  Then, each of those four segments is a parody and homage to a particular genre and style.  Additionally, each segment is directed by a different person – Adam Rifkin who directed mostly a split between family fare and boner comedies/thrillers, Tim Sullivan who was mostly known for producing movies like Detroit Rock City before making 2001 Maniacs with Robert Englund, Adam Green who made his mark with the Hatchet series of horror films, and Joe Lynch who is most recently known for directing Mayhem starring Steven Yeun and Samara Weaving.

Chillerama was the brainchild of Rifkin and Sullivan who met on Detroit Rock City and spitballed an idea for an anthology called Famous Monsters of Filmland – a title based on the Forrest J. Ackerman magazine that they grew up reading.  END_OF_DOCUMENT_TOKEN_TO_BE_REPLACED 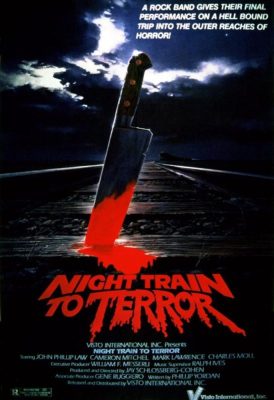 You release so many movies that I need to not only see, but also write about in near manic volume.  This time around, not only do you have me at a movie that I remember seeing constantly at video stores in the 80s and 90s, but you also have me going all in on an anthology flick.  This is new levels of villainy, VS.

But not only that, this week’s feature, Night Train to Terror, is infamously known as being among some of the hammiest and worst cinema could possibly offer.  What’s curious is that this movie isn’t without some interesting people.  There’s B-Movie awesome guy, Cameron Mitchell.  That seems pretty solid.  I’ve seen lots of his work.  There’s also John Phillip Law.  He was in Barbarella.  Together, Law and Mitchell were in Space Mutiny!  How could this possibly be bad? END_OF_DOCUMENT_TOKEN_TO_BE_REPLACED