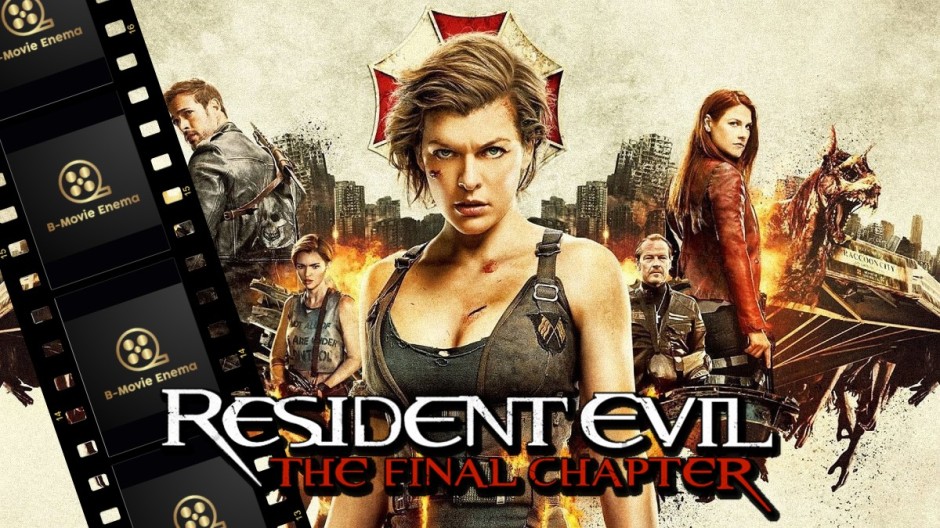 Oh thank god… This shit is finally over.

Coming into this month that I dubbed something like Resident Evil Sequels Month, I was really, really, very worried about how my mental health would survive this. See, here’s the thing… The first Resident Evil is very awkwardly bad early 00s action schlock with zombies and monsters. I had major issues with that, but I could live with it just being a shitty movie. 2004’s Resident Evil: Apocalypse took that and cranked it up to about a 35 on the shitty scale. It was laughably bad. It’s bad movie night bad.

But, to my surprise things kind of went a better direction. Resident Evil: Extinction brought in a new look and feel, and I liked the post-apocalyptic landscape. Resident Evil: Afterlife brought director Paul W.S. Anderson back into the director’s chair after writing the previous two entries, but it was a bit of a step down, but at least not terrible (at least better than the first two films), and Resident Evil: Retribution was a better mix of the action schlock with sci-fi schlock and horror schlock. The last three entries at least proved the series could be somewhat entertaining.

But here we are, at the end, with Resident Evil: The Final Chapter. Why am I bemoaning the time spent and thanking magical sky man that it’s all over? These movies are all really quite tiring. I want to move beyond them so badly because I’m so worn out by the insanity that is inflicted onto my eyeballs and brain. It’s like Stockholm Syndrome at some point. Do I really like some of these movies or has my brain simply adjusted to their crap factor and I’m just letting it happen to me. It’s got me in a sleeper hold and just whispering to me, “Let it happen… Shhhh… Let it happen.”

And, frankly, if that was Milla Jovovich doing that to me, I’d be okay with all that is happening.

END_OF_DOCUMENT_TOKEN_TO_BE_REPLACED

Oh, we can see the light at the end of the tunnel on Resident Evil Sequel Month here at B-Movie Enema!

Admittedly, it really was only the first two entries of this series that I struggled with the most. The last two haven’t been as bad. Afterlife did have some really goofy action sequences but they were fun to watch. But, here we are, the FIFTH movie in the series – Resident Evil: Retribution. This movie came out in what would ultimately be the 10th anniversary of the first film.

Interestingly, Afterlife had a huge box office take. After watching it, I kind of understand why. Again, over the top action, but fun and kind of accessible to people who want to see a little bit of gore, a little bit of action, and both Milla Jovovich and Ali Larter lighting the screen on fire with their feisty sexiness. This movie didn’t perform quite as well, but it’s kind of like saying that Scottie Pippen didn’t perform as well as Michael Jordan. This movie still made a shit ton of money ($240 million on a $65 million budget – the most expensive movie of the series).

So, let’s take a look back at what’s happened before we press forward, yes?

END_OF_DOCUMENT_TOKEN_TO_BE_REPLACED

Resident Evil Sequel Month carries on here at B-Movie Enema. I… I don’t know how I feel about this.

We’re at the halfway point of the month and I can say that while I didn’t like the original entry in the series, it wasn’t as bad as the second. However, the third, Resident Evil: Extinction, despite it being the worst reviewed movie in the series, surprised me in a lot of ways. Sure, we can debate exactly why Umbrella is still operating like a company when the world is apparently a total wasteland, or what they were still doing with experiments and so forth, but it was a different movie that mixed some good elements of Day of the Dead with Mad Max and so on. I approved.

There also appeared to be some glimmer of hope in the third movie’s conclusion that Alice (Milla Jovovich) is going to punch all the bad guys while Claire (Ali Larter) was going to lead as many survivors as possible to the supposedly infection-free area of Alaska. I like hope. I like the idea that there’s a chance the world can come back from the brink.

Let’s see how Resident Evil: Afterlife fucks this up!

END_OF_DOCUMENT_TOKEN_TO_BE_REPLACED 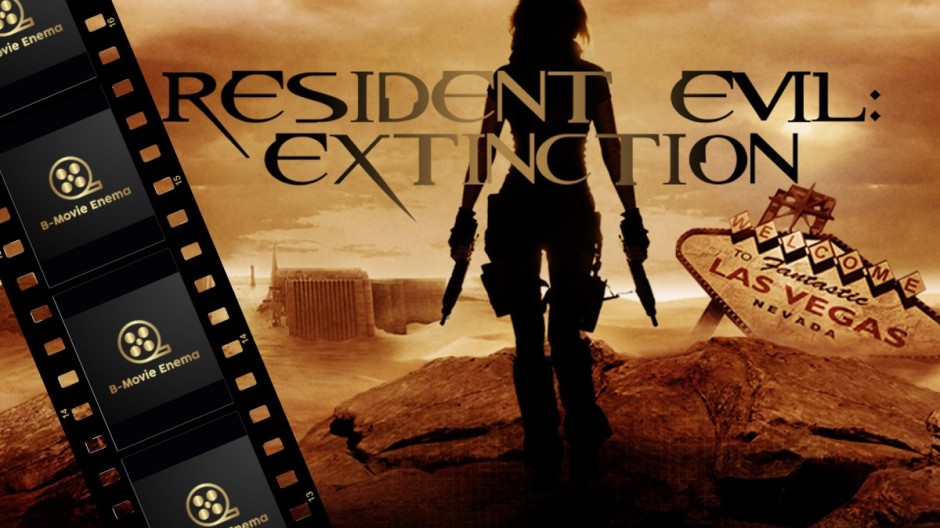 Well, look who came back for another dose of utter terrible batshit pain! It’s you! This is B-Movie Enema. I am Geoff Arbuckle. This is Resident Evil Sequel Month. This time around it’s the third installment, Resident Evil: Extinction from 2007.

We’re still with Paul W.S. Anderson on writing duty, but this is the last time that he would not direct an entry of the series. This time around, we have British director Russel Mulcahy. Mulcahy is probably best known to people come here to this page as the director of 1986’s Highlander. That movie is rad. Plus Queen’s soundtrack is amazing.

END_OF_DOCUMENT_TOKEN_TO_BE_REPLACED 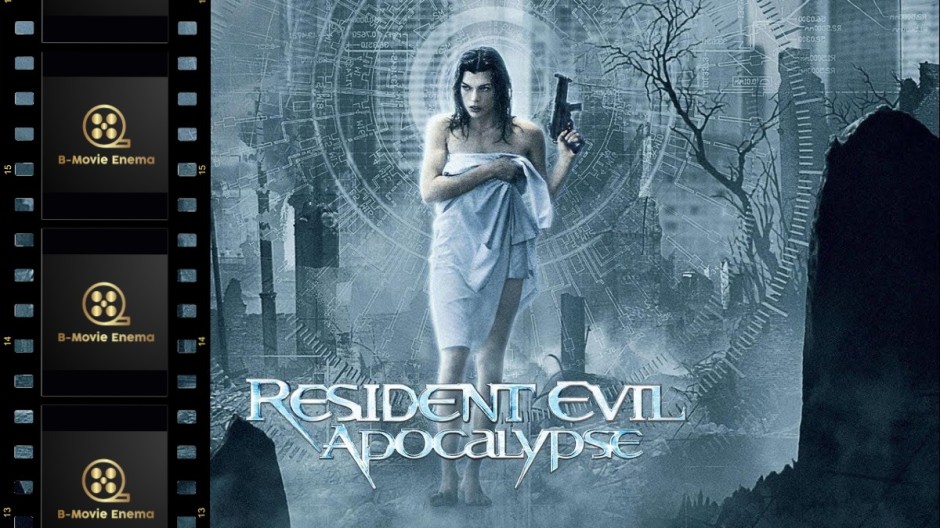 Oh boy, Geoffrey… You’ve really stepped in it this time.

Welcome to B-Movie Enema. We’re glad you’re here. It’s October and that means the month of spooks and ghouls and vampires and the exact girls at Walmart you expect to be considering which sexy version of a totally unsexy thing to wear as a costume has dawned. This is our favorite month around here and there’s a deep, deep history between this site and Halloween. Let me explain!

B-Movie Enema was born on October 3, 2014. Those first five articles were all horror or monster themed to celebrate October. While 2015 was a complete wash, whenever there’s been B-Movie Enema, there has been an October theme (of sorts), and a special Halloween article. 2021 is no different! I’m getting back to a series I first covered back in May. I hated it. Bad. But I made the promise to you, my dear readers, and myself, that I would finish this series and I guess I decided that the perfect time was to ruin my favorite month of the year.

So, here we are. 2004’s Resident: Apocalypse is kicking off Resident Evil Sequel Month! And I hate it!

END_OF_DOCUMENT_TOKEN_TO_BE_REPLACED

So here’s a movie I’ve wanted to talk about in some way, shape, or form since I got into this Enema business – Paul W.S. Anderson’s Resident Evil. But why? Why would I want to dive deep into this series? Well, there are lots of reasons I can think of. First, it’s a movie based on a video game series. The genre of video game movies are lousy with movies that are, well, lousy.

Second, Paul W.S. Anderson himself. Look, I like his Event Horizon. I thought that movie was creepy, fun, and fine enough despite its bad reviews. I know people feel the same way about his follow up film Soldier. I didn’t see that one. Mortal Kombat… Eh… That’s a bad movie. It is a very, very bad, bad movie. That said, it’s kind of fun in its shitliness.

Third, I saw this movie. I was working at a movie theater on March 15, 2002 when this film came out. I saw it. It was bad. It was a big, dumb, bad action movie. But it made a shitload of money. Piles of dough was thrown at this movie by its fans. Five sequels later, people freaking love this movie and series. All this from a really bad movie that is kind of emblematic of the entire first decade of movies that launched the 21st century.