For Thanksgiving, Geoff and Nurse Disembaudee serve up a real turkey of a movie. Join them for The Giant Claw on this episode of B-Movie Enema: The Series!

Season 3 of B-Movie Enema: The Series concludes with the first feature film from the master of cinema, Stanley Kubrick – Fear and Desire.

This week’s B-Movie Enema is a bit of a treat – and the man who made it is fascinating.  I’m going to take a look at Teenagers from Outer Space.

This film, made almost single-handily on a production level by Tom Graeff, is not exactly all that well-known.  It didn’t receive particularly good reviews.  It isn’t exactly remembered in any spectacular way.  In fact, the most famous it probably ever got was appearing on a 1992 episode of Mystery Science Theater 3000. END_OF_DOCUMENT_TOKEN_TO_BE_REPLACED

I think it was only a matter of time before it came to this.  This is one of those staples of bad movies.  While maybe not be a Plan 9 or The Room, this was a movie that seemed to step up to the proverbial plate and swing hard for the fences only to pop the ball up right in front of the plate.

It’s like you should hear a sad trombone play every time you mention the title.  It’s not without a couple of really great pieces – a great performance by Jeff Morrow (who was in This Island Earth), and a neat idea springing forth from actual scientific discovery through particle physics.  However, you see that fuckin’ bird with those goofball eyes and doofy expression and everything just goes right into the crapper.  This movie is universally hailed as one of the worst attempts ever at a sci-fi monster movie. END_OF_DOCUMENT_TOKEN_TO_BE_REPLACED 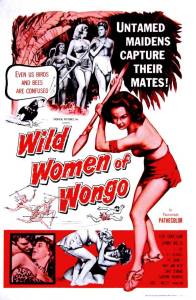 If there is one thing I’m kinda into, it’s the idea of “untamed maidens” and the possibility of being captured as their mate.

This week, I want to travel back to the late 1950s to talk about a movie that is pretty notoriously bad.  It’s kinda pointed to as one of those classic, women-gone-wild types of movies that came out near the end of the 50s.  It’s almost like these movies were in direct conflict with the reality of housewives and the June Cleavers of the pop culture landscape.  It’s a precursor to the sexual revolution that would grip the 60s. END_OF_DOCUMENT_TOKEN_TO_BE_REPLACED

Is there anything better than a man in a monkey suit?

Well, probably, but in an old movie, well…  Yeah, I guess there are still things better than a man in a monkey suit.  However!  It’s still pretty great.  As is Lon Chaney, Jr. who was the Wolf Man.  Not to mention this also stars Raymond Burr who not once, but twice faced Godzilla and lived to tell the tale.  He was also Perry Mason.  I love me some Perry Mason.

Top billed, though, is Barbara Payton.  She has a story all her own about being drop dead gorgeous, who could make it in movies with her looks, but also had little real talent.  She died only about 15 years after the release of this movie after her life spiraled out of control and into booze, a horrifically violent relationship, and even prostitution.  She did write a tell-all book about her sorrowful life called I Am Not Ashamed. END_OF_DOCUMENT_TOKEN_TO_BE_REPLACED