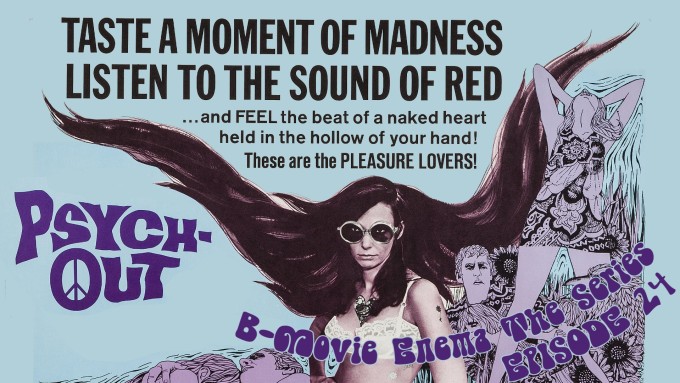 Jack Nicholson, Susan Strasberg, Sam Rockwell, and Bruce Dern star as hippies headed for a real bad Psych-Out on this week’s B-Movie Enema: The Series. This episode is available only at the website or Vimeo,… More 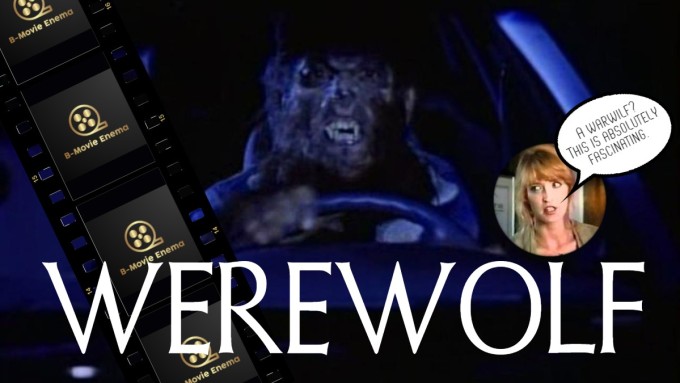 Wurr-wilf? That’s what B-Movie Enema Industries has on tap this week? You better believe it. It’s “absolutely fascinating”. Werewolf from 1995 is historically known as one of the funniest episodes of Mystery Science Theater 3000.… More 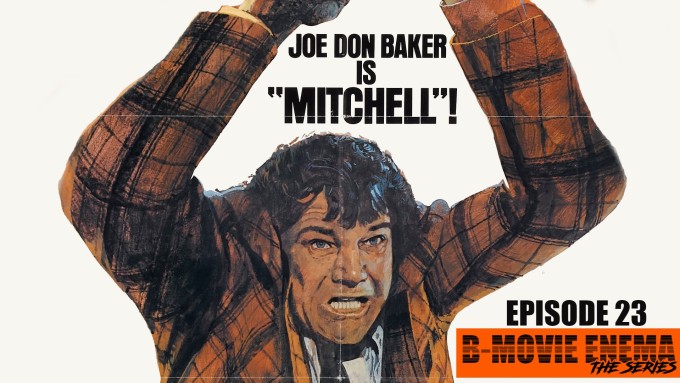 My, my, my, my Mitchell! This new episode of B-Movie Enema: The Series gets a visit from Joe Don Baker in his classic 1975 action flick! Or watch on B-Movie Enema’s YouTube Channel! 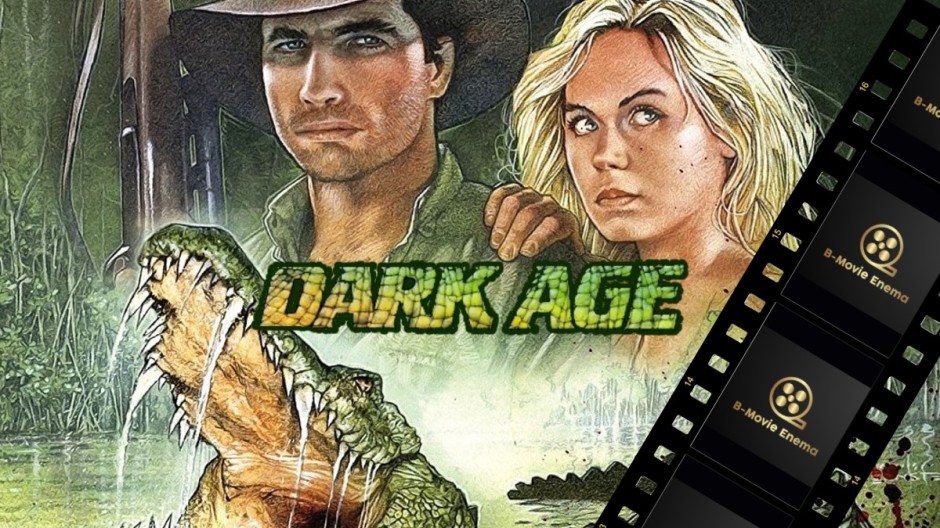 We’re goin’ to a land down under where John Jarrat and crocs rumble. Can’t you hear Arch Nicholson tell Nikki Coghill cut? You better run, I better get started.

Oh yes, it’s time to return to Australia for one of the most well liked Ozploitation horror adventures! This week, I’m talking about Arch Nicholson’s 1987 giant crocodile flick Dark Age. Now, check it out, this was part of a two-picture deal with the recently resurrected RKO Pictures. RKO was a golden age of cinema studio. Their biggest claim to fame? Motherfuckin’ King Kong, of course. RKO dissolved at the very end of the 50s and returned in 1981 and collaborated with some of the major studios.

I’m gonna guess this and the partner movie in the deal with RKO, The Lighthorseman, were products of the post-Crocodile Dundee Australia hysteria that not only gave us a bunch of Paul Hogan stuff and Yahoo Serious. I think we know who won in that deal. Also, we had lots of Mel Gibson stuff in the late 80s, as he was one of the biggest stars in Hollywood at that time too. So, yeah, I can see RKO wanting in on that action.

END_OF_DOCUMENT_TOKEN_TO_BE_REPLACED 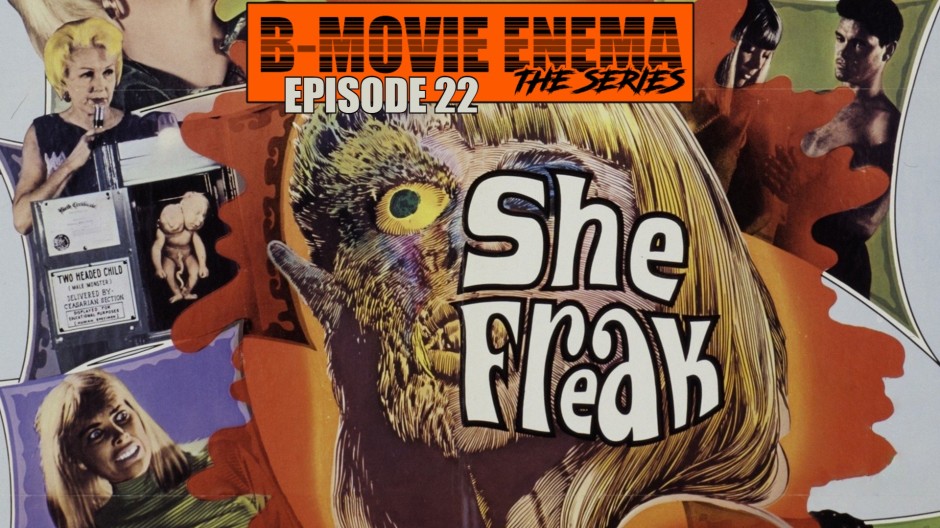 B-Movie Enema: The Series runs away and joins the carnival, but uh-oh… There’s a gold digging lady with a very specific prejudice in 1967’s She Freak! 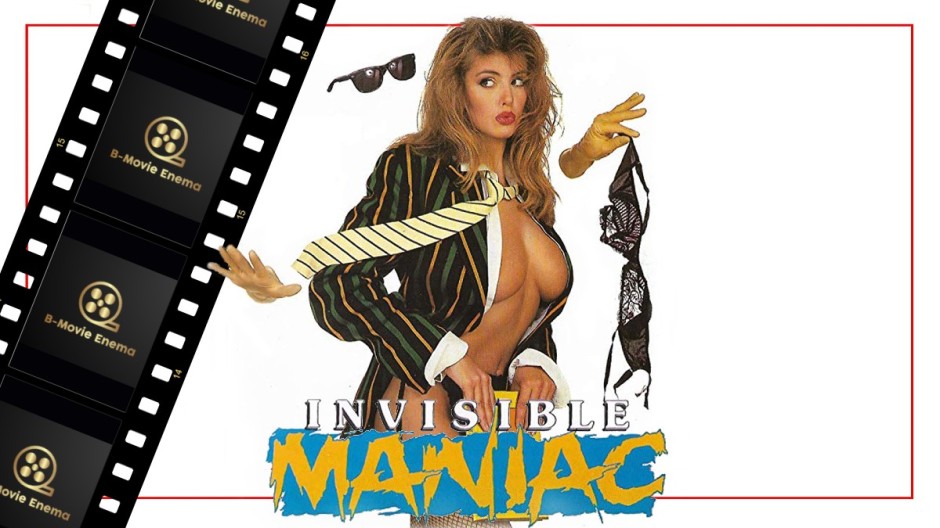 Alright… It’s time for a great movie – The Invisible Maniac. When it was revealed to be remade with a modern sensibility dealing with how difficult it is for women to escape abusive relationships and how it could be exasperated by that guy having a suit that makes him invisible!

Wait… This just in. Nurse Disembaudee, my lovely co-host for B-Movie Enema: The Series (currently happening every Saturday evening right here at your favorite website), is handing me a note that says… “Geoff, you dummy, that was The Invisible Man from 2020. This is The Invisible Maniac from 1990. It’s also known as The Invisible Sex Maniac.”

OHHHHH… Gotcha. Okay, well, considering that other title, this is a VERY different type of movie. Maybe I should, you know, change my tone and approach here… and maybe stop recycling gags?

END_OF_DOCUMENT_TOKEN_TO_BE_REPLACED 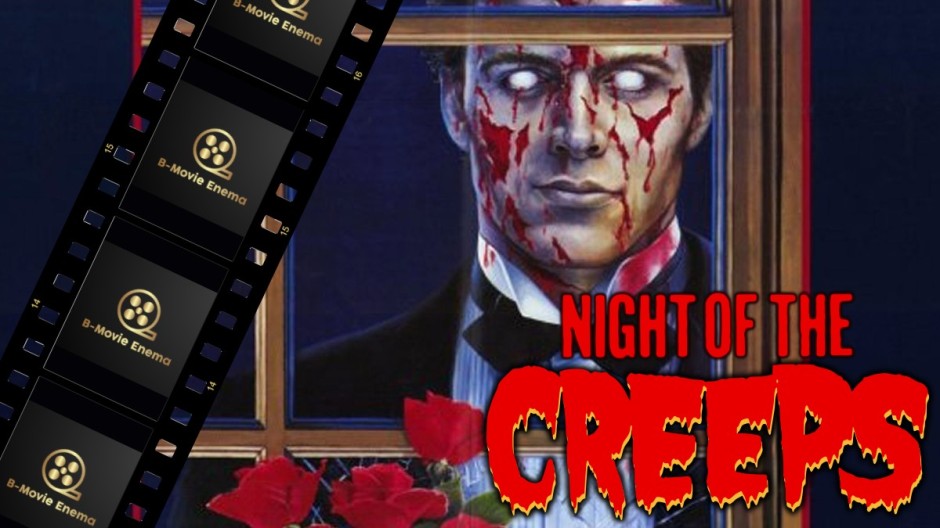 Unless you’re in the Southern Hemisphere. It may still be Halloween for you, but it’s also spring and things are coming to life instead of dying off.

But, hey! That actually kind of fits today’s featured movie, 1986’s Night of the Creeps! I’ll come back around to that in just a moment. First, let’s talk about Halloween as a tradition in these parts. Way back in the very early days of B-Movie Enema, the final Friday of 2014 was Halloween and that saw the release of the bottom of the barrel Jess Franco Oasis of the Zombies article. Then, in 2016, I did an impromptu Halloween special article after watching the infuriating Halloween: Resurrection. In 2017, it was another trip to the Halloween franchise with Halloween III: Season of the Witch. I cheated a bit in 2018 and gave Halloween day to Film Seizure was covered the new Halloween movie that came out that year, so on the 30th, I did the remake of Night of the Demons just days after doing the original. In 2019, it was the rock and roll horror Trick or Treat. Last year, it was the conclusion of of a very personal set of movies when I covered The Slumber Party Massacre.

END_OF_DOCUMENT_TOKEN_TO_BE_REPLACED 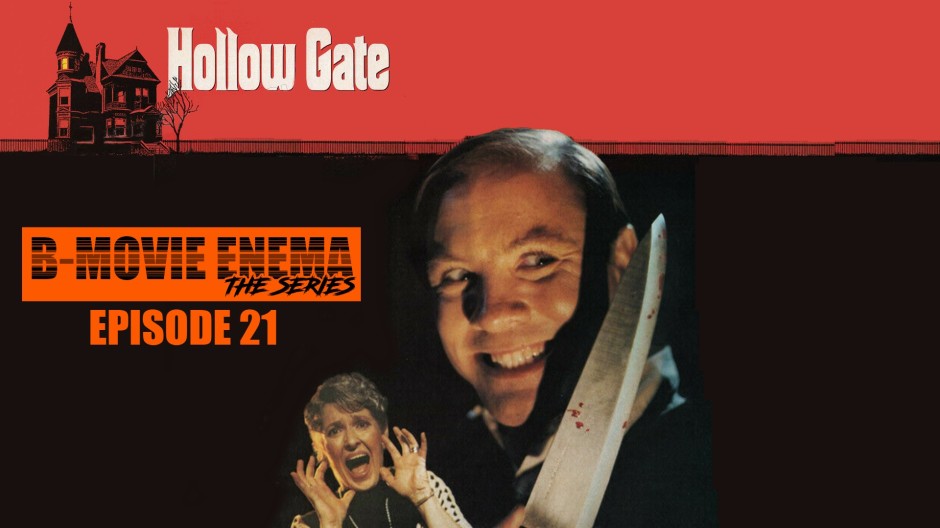 It’s Halloween, and Geoff and Nurse Disembaudee are decked out in some pretty intergalactic outfits as they watch a bizarre little 80s slasher called Hollow Gate.

Oh thank god… This shit is finally over.

Coming into this month that I dubbed something like Resident Evil Sequels Month, I was really, really, very worried about how my mental health would survive this. See, here’s the thing… The first Resident Evil is very awkwardly bad early 00s action schlock with zombies and monsters. I had major issues with that, but I could live with it just being a shitty movie. 2004’s Resident Evil: Apocalypse took that and cranked it up to about a 35 on the shitty scale. It was laughably bad. It’s bad movie night bad.

But, to my surprise things kind of went a better direction. Resident Evil: Extinction brought in a new look and feel, and I liked the post-apocalyptic landscape. Resident Evil: Afterlife brought director Paul W.S. Anderson back into the director’s chair after writing the previous two entries, but it was a bit of a step down, but at least not terrible (at least better than the first two films), and Resident Evil: Retribution was a better mix of the action schlock with sci-fi schlock and horror schlock. The last three entries at least proved the series could be somewhat entertaining.

But here we are, at the end, with Resident Evil: The Final Chapter. Why am I bemoaning the time spent and thanking magical sky man that it’s all over? These movies are all really quite tiring. I want to move beyond them so badly because I’m so worn out by the insanity that is inflicted onto my eyeballs and brain. It’s like Stockholm Syndrome at some point. Do I really like some of these movies or has my brain simply adjusted to their crap factor and I’m just letting it happen to me. It’s got me in a sleeper hold and just whispering to me, “Let it happen… Shhhh… Let it happen.”

And, frankly, if that was Milla Jovovich doing that to me, I’d be okay with all that is happening.

END_OF_DOCUMENT_TOKEN_TO_BE_REPLACED 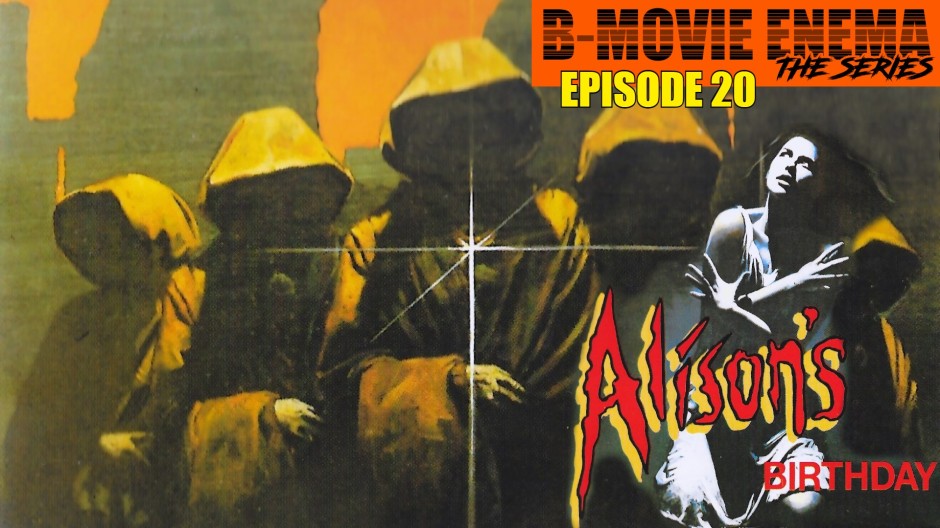 B-Movie Enema: The Series takes a trip down under for a creepy Ozploitation classic – Alison’s Birthday! 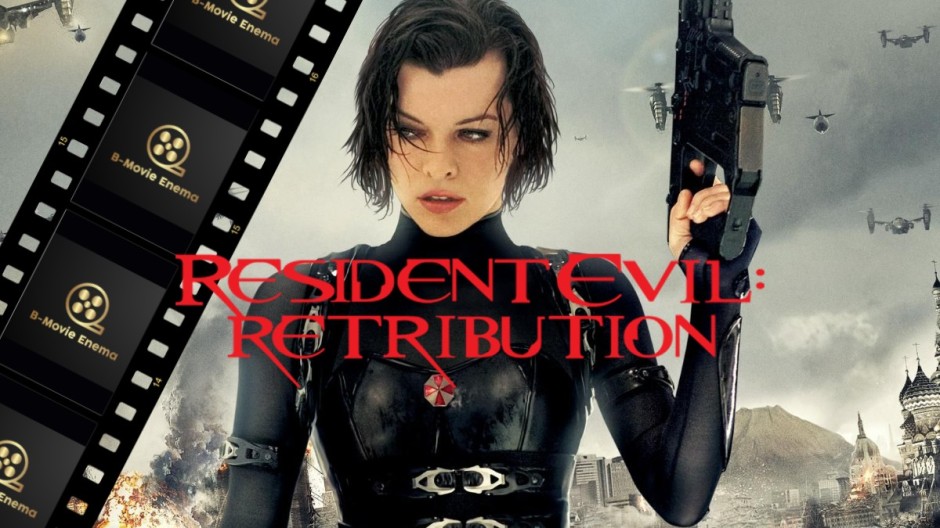 Oh, we can see the light at the end of the tunnel on Resident Evil Sequel Month here at B-Movie Enema!

Admittedly, it really was only the first two entries of this series that I struggled with the most. The last two haven’t been as bad. Afterlife did have some really goofy action sequences but they were fun to watch. But, here we are, the FIFTH movie in the series – Resident Evil: Retribution. This movie came out in what would ultimately be the 10th anniversary of the first film.

Interestingly, Afterlife had a huge box office take. After watching it, I kind of understand why. Again, over the top action, but fun and kind of accessible to people who want to see a little bit of gore, a little bit of action, and both Milla Jovovich and Ali Larter lighting the screen on fire with their feisty sexiness. This movie didn’t perform quite as well, but it’s kind of like saying that Scottie Pippen didn’t perform as well as Michael Jordan. This movie still made a shit ton of money ($240 million on a $65 million budget – the most expensive movie of the series).

So, let’s take a look back at what’s happened before we press forward, yes?