Say…  What have we here?  Ladies…  Allow me to introduce myself to you – I am a dude who makes terrible decisions in the quest to find a good girl.  And, shiiit…  You are apparently your Mama’s Dirty Girls after all.  You are 100% my style.

All that first paragraph was for me to say the following:

OF COURSE I WOULD EVENTUALLY COVER THIS MOVIE.

END_OF_DOCUMENT_TOKEN_TO_BE_REPLACED 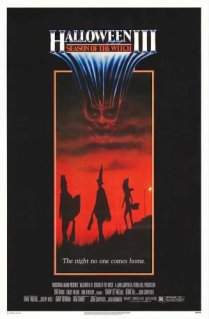 I have a confession to make, and I don’t think when I reveal it, I will be the only one who shares this feeling.

I freaking love Halloween III: Season of the Witch.

For some, that’s heresy.  “A Halloween movie without Michael Myers?!?  No, sir!  I will not have it!”  Well, the truth is, the original movie, a masterpiece that excelled beyond most people’s expectations, was never meant to have an entire franchise centering around lead antagonist Michael Myers.  Really, John Carpenter only wanted to tell his own version of the boogey man.  He and producer Debra Hill did conceive a sequel that would continue the story of Michael Myers and Laurie Strode (Jamie Lee Curtis), but when approached by Universal Studios for a third installment, Carpenter said he’d only agree to it if it was not connected to the first two films at all. END_OF_DOCUMENT_TOKEN_TO_BE_REPLACED

Who’s Angela?  Well, she was the star of a series of slasher flicks derivative of the original Friday the 13th film.  She first appeared in this week’s feature, Sleepaway Camp.  And in no way do I expect this movie to end with any kind of twist ending whatsoever.

This is the type of movie I fucking loved when I was a kid.  It’s a movie that placed kids in peril.  The majority of the cast are kids of obvious young ages.  I don’t believe any of the kids are meant to be older than 16.  While there are plenty of adults around to be victims, the vast majority of kills are young kids.  Like real young. END_OF_DOCUMENT_TOKEN_TO_BE_REPLACED

Rollercoaster was simply another in the decade-long string of “disaster films” that started at the very dawn of the 1970s with Airport.  It became such a genre in itself that you can almost think of that as being the same thing back then as we see now with superhero movies.  While the 70s were the “golden age” of the disaster flick, the genre still exists to this day.  Movies featuring high drama in the face of incredible tragedy still come out in fairly high numbers.  Anything that stars a relatively large cast that ends with a lot of them dead and a lot of others barely making it through whatever the disaster wrought could basically be labeled as one of these disaster films. END_OF_DOCUMENT_TOKEN_TO_BE_REPLACED