Hello and welcome to B-Movie Enema.  This week, I’m gonna discuss something I’ve wanted to do for a while – Tobe Hooper’s 1990 made-for-television thriller I’m Dangerous Tonight.

Now, the easy joke here is to say that “I’m Dangerous Tonight” is something I’d exclaim after a Crave Case of sliders from White Castle, but…  Actually.  Wait.  That’s a pretty good one.  I’m pretty bummed I didn’t lead with that.

Eh…  Never mind.  There’s a lot here I could discuss.  You have Tobe Hooper in the director’s chair.  The fact this was a TV movie and not a cinematic release.  Mädchen Amick lookin’ gooood.  Anthony Perkins is right there on the poster…    Yeah.  I guess I can go with other things than a farty poop joke. END_OF_DOCUMENT_TOKEN_TO_BE_REPLACED

Every now and then a movie suddenly finds its audience.  Take The Rocky Horror Picture Show, for example.  Sure, it didn’t find that audience immediately, but within a couple years of release, the mega fans were showing up at midnight showings in costume and so forth.  With the advent of home video and the explosion of home entertainment via cable and a video rental store in almost every strip mall as well as even grocery stores, movies that didn’t do so well in theaters suddenly had a second life.

Then comes this curious little direct-to-video movie called Tammy and the T-Rex.  Aside from it featuring two very young, and very pretty future stars in Denise Richards and Paul Walker, it was relatively overlooked as a low budget teenage romantic comedy.

However, in recent years, it’s been rediscovered… END_OF_DOCUMENT_TOKEN_TO_BE_REPLACED 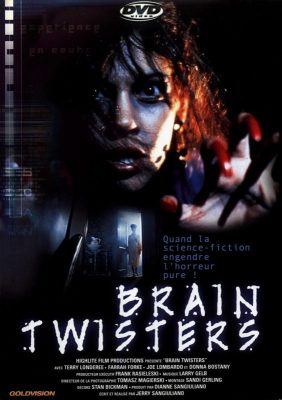 The 1990s saw a leap in technology.  From 1990 to 1999, the leaps in percentages in the number of households that had computers or word processors of some sort year over year showed that advancements in computer technology took it from the magical boxes that movies told us could almost do anything in previous decades to something that might show up in dens of every house on any street in America.  By the mid-90s, the internet would connect people all over the world which, thanks to its capabilities to gather information, at the very least, changed the way students would work on homework and term papers.  Either way, with each slight advancement from word processing power to internet to faster internet to shopping, etc., computers started taking over our every day lives.

With the computer industry making those leaps and bounds, naturally Hollywood wanted to cash in on the hype, or the potential terror, of advanced technology at everyone’s fingertips.  That’s where this week’s B-Movie Enema, Brain Twisters, comes in. END_OF_DOCUMENT_TOKEN_TO_BE_REPLACED

What the fuck is this shit? 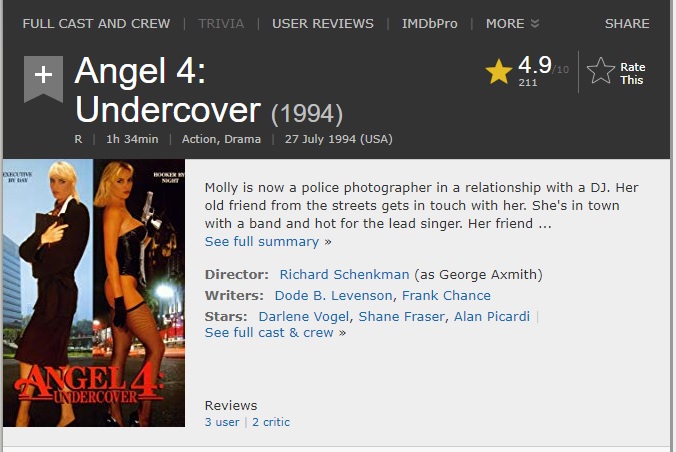 No…  I…  The “Angel Collection” came with only THREE movies…  Wh-what is this?

Following up on a movie I covered at the end of last year, Space Babes from Outer Space, let’s take a look at what’s likely its most direct influence, 1993’s Beach Babes from Beyond.

Beach Babes from Beyond comes to us from schlockmeister David DeCoteau who, quite frankly, I could have an entire spin-off blog about.  I own both this and its sequel thanks to Full Moon Features who distributes the series on DVD.  If this layered pedigree of DeCoteau and Full Moon ain’t enough for you, well…  Then the cast should also be enough to make you realize this movie is loaded with talent.  First, we have Linnea Quigley who is just a treat whenever you can see her in her prime years of the mid 80s through the mid 90s.  If that ain’t enough for ya, we have royal lineage of Joe Estevez (THE Estevez of the family), Don (who needs Patrick when you got Don) Swayze, Joey Travolta (the name speaks for itself), and the matriarchal Jaqueline Stallone.

I’ve got to say, I’ve really enjoyed the three previous chapters in the series.  Are they the very best vampire flicks I’ve ever seen?  No, but it’s worth mentioning that Full Moon Features specifically seemed to try to have some idea of consistency (aside from one piece that I will get to momentarily), and some considerable effort while filming the movies in Romania to add the appropriate flavor to the whole thing.  Additionally, each of the four actual Subspecies flicks were directed by the same guy, Ted Nicolaou, primary villain Radu was played by the same guy, Anders Hove, each time around, and Michele was played by Denice Duff in three of the four films.  That’s consistency that you don’t often find in a lot of direct-to-video horror.  Hell, you may not even always find it big budget horror in the 80s or 90s.

But before we get into 1998’s Subspecies 4: Bloodstorm, we need to do a little bit of housekeeping. END_OF_DOCUMENT_TOKEN_TO_BE_REPLACED

Welcome back to Subspecies Month here at B-Movie Enema.

Full Moon Features had a certified hit on their hands with the first Subspecies film.  The second, Bloodstone: Subspecies II, while leaving me with a whole bunch of questions (not the least, “Where are the Subspecies?”), was still fairly decent.  It wasn’t as good as the first, but was far from some of the really bad cash-ins Full Moon tends to do later  in the 2000s.  The one thing the sequel did, was leave us with a cliffhanger.  Last we saw, Michele (Denice Duff) had seemingly defeated the evil Radu (Anders Hove), but needed to stay behind in a crypt out of the sunlight before being able to leave with her sister Becky (Melanie Shatner).  However, Radu’s mother and beef jerky person, aptly named Mummy, snatched Michele and drug her back below into the crypt for who knows what.  We were teased with a coming soon title card that reminds many of the era of how Back to the Future II teased Back to the Future III.

So, here we are, it’s time for Bloodlust: Subspecies III! END_OF_DOCUMENT_TOKEN_TO_BE_REPLACED

With Subspecies being another hit for Full Moon Features, it was clear that a sequel was indeed needed.  So, two years later, Full Moon released Bloodstone: Subspecies II picking up directly after the conclusion of the first chapter.  Because this is being featured on this blog, and the dreaded specter of the Angel series still haunting me, you better believe there are casting changes here.

(And yes, that Angel specter is still constantly reminding me there is a fourth film I have yet to cover.  It haunts my dreams, man.  It’s a constant reminder of my failings in life.  This devilish Angel will not be appeased until I finally cover it.  Just hold tight and I will get there in time.  In fact, sooner than you know.) END_OF_DOCUMENT_TOKEN_TO_BE_REPLACED