We’ve come to the end of Russ Meyer Month here at B-Movie Enema.

Over the last several weeks, we’ve gone from Depression-era Missouri farms to a sexually liberated Canadian girl to go-go dancers with an axe to grind to wild Hollywood hippie parties.  So naturally there is only one place left to go…  Nazisploitation.  This week, it’s the 1976 soft-core sex comedy Up!

This is another of the Meyer-Ebert collaborations, much like with last week’s Beyond the Valley of the Dolls.   After that film and its success with audiences and some critics, Meyer tried his hand a couple more times with mainstream films, but both flopped.  He decided he needed to get back to boobs… er basics.  Back to basics.  He swore he’d never stray away from his formula again. END_OF_DOCUMENT_TOKEN_TO_BE_REPLACED

“This is my happening, and it freaks me out!”

Welcome back to B-Movie Enema’s Russ Meyer Month.  We’ve finally gotten to the back end of the month and his 70s features.  It also brings us to two features Meyer did with famous Chicago movie critic Roger Ebert.  First up, it’s the one the duo is most famous for – Beyond the Valley of the Dolls.

Meyer and Ebert cranked out a treatment that came to 127 pages in about a week and a half.  Ebert completed the screenplay in three weeks.  It was intended to be a straight sequel to the 1967 film Valley of the Dolls.  Now, here’s where we start in on the rabbit hole that leads to Meyer and Ebert coming in. END_OF_DOCUMENT_TOKEN_TO_BE_REPLACED 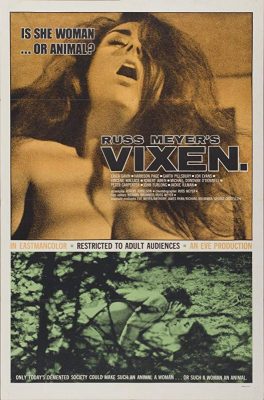 I love how Russ Meyer uses punctuation in his titles.

Vixen! might just be considered one of Meyer’s very best (though I have some commentary to add later).  The Los Angeles Times and the New York Times both gave high praise to this film despite its themes and obvious sexploitation nature.  However, again, it’s Roger Ebert who maybe says the best, most heartfelt comments calling this not just the “quintessential Meyer film” but that he also talks about how Meyer creates characters.  We should already be aware with Faster, Pussycat! Kill! Kill! and Mudhoney that Meyer likes going over the top for his villains and various other stereotypical characters.  Ebert calls to the front that its Meyer’s talent in doing that that helps put people at ease seeing their first “skin-flick” and allows people to just have a good time – maybe the only thing Russ Meyer really wanted people to have. END_OF_DOCUMENT_TOKEN_TO_BE_REPLACED

Last week, Russ Meyer Month started at B-Movie Enema with Mudhoney, a nice little tawdry tale in the American Plains during the Depression.  This week, we pick up a movie that is one of Meyer’s best known – Faster, Pussycat! Kill! Kill!

As I mused there, Faster, Pussycat! Kill! Kill! is a fairly well known movie.  There are two movies in Meyer’s filmography that probably get the most attention in terms of being trivia answers, but for different reasons.  There’s this one that we’re talking about this week for its fun title.  The other will be covered in two weeks because of who wrote it. 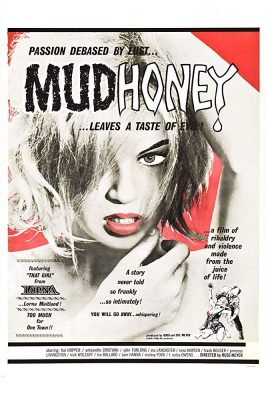 The name usually conjures up images of sleazy things happening with buxom beauties and just about everything that someone might call “exploitation” when it comes to 60s and 70s cinema.  While it may seem like his movies are full of that sleaze, many note that his films were important in terms of female empowerment and showing women who aren’t just sexually free, but generally more powerful than the men in his films.  That said, he would also place his female characters in ordeals that they would have to prove their strength and their ability to overcome the obstacles that they face in his movies.  It’s probably true that his films were subversive in many ways that would eventually strike at the heart of a rising feminist movement.

All that and more will be discussed over the course of the next five weeks as B-Movie Enema tackles Russ Meyer Month!  We begin with 1965’s Mudhoney… END_OF_DOCUMENT_TOKEN_TO_BE_REPLACED