Lloyd Kaufman and his Troma Entertainment arrive to B-Movie Enema.

Troma is not unknown for some pretty crazy movies like the Toxic Avenger series, Tromeo and Juliet, and Sgt. Kabukiman NYPD.  Not long after the turn of the century, Troma did a young filmmakers series.  One of the movies to come out of that series is today’s featured movie, Pot Zombies.  And by “One of the movies…” I mean the only movie to come out of this project.

According to High Times Magazine, “Finally, a film that delivers what it promises!”

That seems like some low hanging fruit there, High Times.  Imagine if you will a movie made called Pot Zombies that is full of high society members of Victorian England.  That wouldn’t fly in any alternate reality, let alone the real reality.  In all 55 minutes of this so-called movie, I can only expect two things – people smoking pot and zombies.  I won’t even expect the green hottie on the cover with the pot leaf tattoos and lack of t-shirt.  If it can’t promise at least some pot and zombies…  Then I’m going to be in for a long night.

So here’s what Amazon gives us as a breakdown and it’s pretty damn great:
“WARNING! Nuclear waste has made it into the weed coming to YOUR town, turning unsuspecting smokers into flesh-craving POT ZOMBIES!

POT ZOMBIES: When they get the munchies, YOU get wasted!”

I kinda like the idea of a naked girl eating another naked girl, and Lloyd Kaufman playing a challenged pizza guy, and band names like Electric Frankenstein and Honky.  I guess I should get started on this movie because they don’t review themselves!

The movie starts with three of the hillbilliest goons walking through the woods who are saying things about women like “Why do women get periods?  Because they deserve it!” and talking about pulling out the tampons by their teeth.  Just moments into the movie and I feel like I’ve made a terrible decision.  But, just because I like you, I’m going to carry on.

So they all start toking up some weed and we get some “comical” disclaimers about how marijuana is illegal and the makers of the movie Pot Zombies don’t condone the use of weed and a bunch of other non-funny shit.  So, out of their haze, they hear a noise and decide to shoot first because they are hillbilly gun nuts I guess.  Anyway, they kill an innocent kid.  When they try to figure out what is going to happen next, now they are murders and shit, they find that one of their friends has turned into a glowing green eyed zombie dude.  Again, asking questions second, one of the hillbillies shoots his zombie buddy.  But unfortunately for him, his other buddy has turned into a zombie too.  So the park ranger, hearing gun shots, comes to investigate and kills off the pot zombies.

Just when I thought this movie should start rolling the credits as it seems this has been nipped in the bud… Heh.  The wrong credits, the opening credits, start instead.  At least the mystery of the tainted weed is solved in the opening credits – some guys pump radioactive gas into a big potato sack of weed.  And just in case you’re wondering, this movie is shot on video.  Not like good video either – like a fucking 1980s style Sony camcorder.  At least this is kind of funny: 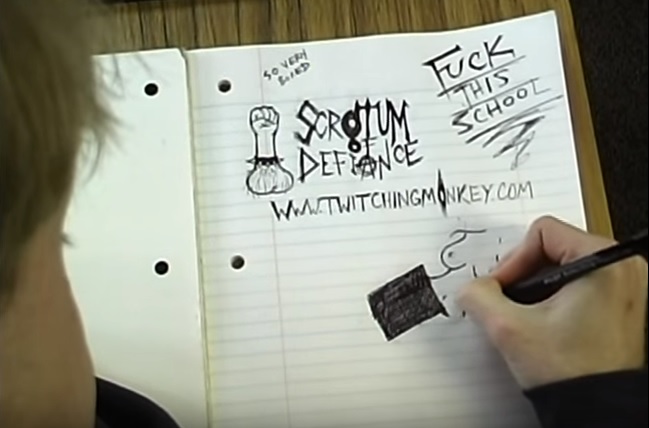 Although, I think the scrotum of defiance should be punching another guy’s crotch, those cartoon tits need to be at least four times larger, and instead of “Fuck this school”, I’d change it to “Fuck this movie”.  But what do I know?  I’m not that into art.

So, this is all setting up our some high school kids who are total burnouts coming in late to a bitchy economics teacher’s class.  After some bullshit about not completing an assignment, we cut to a  Birdemic style news report about some people who died from some mysterious disease.  She lists off a bunch of people who sound like the kind who would smoke weed, but whatever.  Whenever someone says something discouraging about drugs, the “filmmakers” made the choice to slow down the dialog and make it all trippy.  We return to the classroom we were just in to find the two college kids we were introduced to have turned into zombies.  The guy punches his hand through the teacher’s chest and rips out her heart.

We see some more pot zombies rampaging through the town – and by “more pot zombies”, I am referring to two pot zombies, and by “town” I am referring to a suburban neighborhood.  They find a punk rock guy suntanning and hoist him up by his piercings and eat him.  Twice, now, though, scenes transition by having intercutting cartoons of joints dancing and being kinda scary…?  I guess?  The next scene finds three rockers watching Night of the Living Dead, sparking up a doob.  Some things start to become very clear…

1. This movie doesn’t “star” anyone.
2. It’s loaded with stereotypical pothead fuckholes
3. This movie is not funny
4. This is not really a movie
5. My life really sucks if I’m spending a Friday night writing about Pot Zombies.

And just when you think Lloyd Kaufman, playing a retarded pizza delivery guy, was going to come in and save this movie, he gets eaten.

Another scene starts, this time with a guy and a girl getting up at the crack of 12:40pm.  She goes off to work with a bowl of pot and the guy rolls a joint for himself at home.  Guess what happens?  Yup!  They become pot zombies.  This is kind of a wash-rinse-repeat type of movie.  This movie also posits that everyone in the universe (minus a couple uptight bitches in high school and on the news) smokes pot.  They also all seem to have the same guy they get their shit from.

This movie manages to do something few 55 minute movies are able to accomplish – BEING FUCKING BORING AS SHIT.  This might have been a slightly below average, yet still slightly clever short where guys get some bad pot and turn into zombies.  However, this movie took a 10 minute idea and expanded it to nearly an hour.  They repeat the same idea over and over and fill it chock full of dumb jokes.  I’m not even going to talk about the makeup or special effects.  I get it they didn’t have any money to have better makeup or effects.  I wish they would have thrown a wadded up $5 bill at the script to see if it would have made it better.

Instead of writing anymore about this bullshit movie, I’m just going to post pictures of people from this movie I want to punch, starting with this asshole:

And definitely this buttmunch: 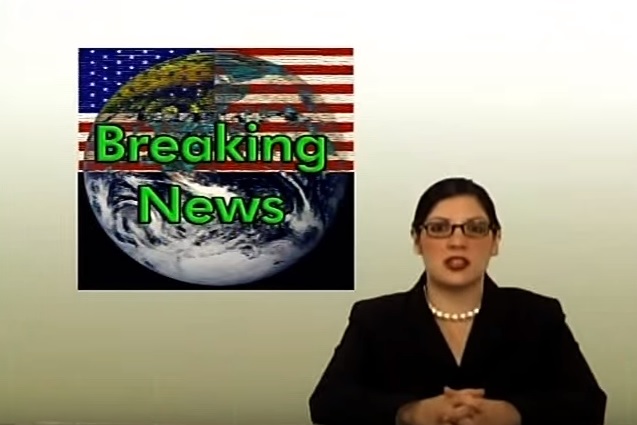 You know what?  You get the picture.  Every fucking body in this movie deserves a faceful of my knuckle sandwich.  Shit…  Even listing off people I want to fist their face is boring me.  This movie is a goddamn disaster scene.

The description I took from Amazon said this shit was going to happen and I gave this movie 36 minutes of my life…  ‘Bout fuckin’ time this thing paid me back for its bullshit.  Just as the gratuitous lesbian hot fuck session begins, the goddamn movie cuts to concert footage of some garbage band.  It cuts back to show the black haired alt girl zombie literally eating out the blonde hot alt girl zombie.  Sadly, nothing lasts forever and this passes us like a ship in the night.  I wish I had tickets for that ship so I can get out of this existence of watching and writing about shitty movies.

I mean, it’s either this or becoming a cutter, so…  I guess I made my bed and need to lie in this shit.

Okay, so the movie shows more people becoming zombies and the movie ultimately ends like it started – badly.  Here’s the thing…  I get the idea of watching a Troma movie with the idea that it’s supposed to be stupid.  Additionally, a movie about potheads is also going to be more of a Picasso as opposed to a Rembrandt (I don’t know what that means but it sounds good as fuck so I’m leaving it in the article).  It’s going to be juvenile and dumb, but fuck guys…  At least TRY to make a movie here.  Keep all the dumb shit in, but you didn’t even have a script did you?

C’mon, writers of Pot Zombies who I am too lazy to look up on IMDb…  You didn’t have a script did you?  You just bought like 5 pounds of weed and invited all your friends over for a movie.  I love the idea of making movies for you and your friends to enjoy, but you let this fucking cat out of the bag, bros.  You let this cat out and it’s running around and clawing eyes out and shitting and pissing everywhere and not catching any mice.  Well, you failed, kiddos.  This movie was fucking dumb.  It’s not even dumb like a Michael Bay movie either.  It’s just a waste of every ounce of effort and lives of the people in the movie.  Yes, even the two hot alt girls.  You let this cat out, and it’s time for me to put it back into its bag.  So…