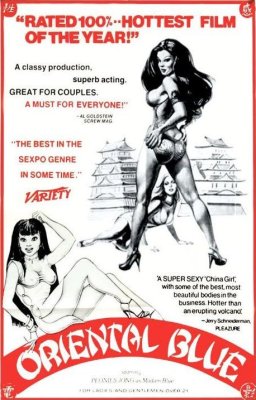 Okay.  Admittedly, last week was a bit of a blunder in my Blue March theme month here at B-Movie Enema.  However, can this week’s feature, Oriental Blue, do better?  Can it improve upon the cockamamie doody bullfuck that was The Vixens of Kung Fu?

Well…  I mean it kinda has to right?  Right?  Yes, it is made by the same guy, Bill Milling.  Yes, it’s Asian-themed.  Yes, there seems to be some form of prostitution afoot.  But I can say it is a full 15 minutes longer.  That has to mean something, right?

But it also was made in the same year and  uses most of the same people in both movies.  It probably takes place in that same goddamn field too.  I swear to god if it also loses its focus and ultimately just plays out with some weird smoking vaginas and jerk off training montages, I’m gonna be real pissed off.

Oriental Blue is the story of Madam Blue, an underground white slaver.  She operates beneath, what else?  A Chinese restaurant.  She has some henchmen go and steal women from the streets and make them do bad shit.

Well, at least this movie starts in the city, where The Vixens of Kung Fu should have started.  Madam Blue and her goons are watching for a girl who has just gotten off from work.  They real obvious like creep behind her in their giant fucking Cadillac and wait for the perfect opportunity to snatch her up.  They take her and BOOM! we have a movie.

So far, I do have a little hope.  No out of place, kooky, wacky overdub.  This seems like a fucking movie and not just some left over scenes of girls fucking and not wearing pants.  You’re showing me something now, Bill Milling.

As the movie begins, Madam Blue speaks to Angel, played by C.J. Laing who was the Head Vixen in the other movie.  She gives Angel what I like to call the “Shanghai Hello”

I have a question.  Angel is wearing that collar thing.  Is that a fashion choice?  Is that an indicator that she belongs to Madam Blue?  While she meets with this guy who is there to put in an order for some girls, Angel is fanning Madam Blue like a servant.  Whatever the answer is, I’m into it.

While I still have some issues with the pacing again – we’re nearly 20 minutes in an 85 minute movie and not much has happened beyond one girl getting kidnapped and broken – this movie is already much better than The Vixens of Kung Fu.  The movie does have something kind of funny about it…  There’s not much of a script.  After the blonde actress gets off, Madam Blue visits with a friend and they are just talking.  There’s no point to their dialog.  It doesn’t do anything for the plot and it doesn’t sound natural at all.  It’s just something to get the two girls to say hello, get over to the couch, and then have them fuck each other.

Madam Blue sends one of her goons, Rocky, out to get her a black girl because, you know, she still has that order to fill from the international union of bordellos and shit.  I kind of wish Rocky was just named “Every 70s Porn Guy Ever”.  That’s a sweet stache and he has a pretty good thicket of hair on his chest and, it’s kind of hard to see, a pretty wide collar.  Rocky doesn’t have to stalk and kidnap an unwilling black chick.  As it turns out, he already knows a lady that fits Madam Blue’s needs.  He meets up with her and takes her home where he also has some love juice to give her.

That brings up a question.  Like, what’s the organizational structure of Madam Blue and her goons?  We saw the one big goon that had to wrestle the actress blonde girl into the car to be taken.  But Rocky, he has connections, seems slicker, and has his own stash of love juice.  So is Rocky higher ranked than the muscle guy?  Do you have to work your way up to a level where you get a bottle of home love juice?  Do all the goons get take home love juice?  Or was Rocky just working for her long enough that he gets that as a reward for tenure? 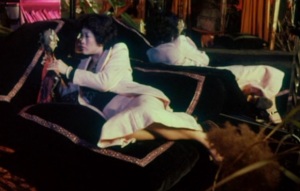 I think this movie is legitimately scene after scene of Madam Blue getting fucked by girls mostly but sometimes dudes too.  It’s almost entirely focused on this lady getting off.  Sure, everyone gets off, but it’s all about Madam Blue.  I find that somewhat fascinating.  She’s kind of bossy and controlling.  It’s like this movie is made more for guys who get off being bossed around.  That’s fascinating to me considering I would assume this is a “mainstream” porn flick and not something that would be considered a niche or fetish type of movie that only reaches a limited audience.

Have I yet said how much better this movie is compared to The Vixens of Kung Fu?  It’s almost unbelievable this was made by the same guy.

Brock, played by Jamie Gillis, is Madam Blue’s go to guy for the hot pussy.  He brings her the best girls, and he’s also the one that she wants to control the most.  He doesn’t go in for those shenanigans though.  He fucks who he wants goddammit.  He will go and find girls for Madam Blue, though.  He’s told to go find a nice, innocent girl.  Brock picks up Antea, played by the same girl who was Prosty in The Vixens of Kung Fu.  He notices she’s down on her luck and he picks her up and takes her to this seedy place he claims he lives.

Let me just say that this is the third time we’ve seen Jamie Gillis in movies on this blog and he’s a fantastic actor.  He’s charismatic as fuck and is legit good at playing the guy who can convince a girl to go with him even after he jokes that he is a white slaver out to abduct her.

Oh, and of course Brock has his own stash of love juice.  He gives some to Antea and she succumbs to its effects.  Brock decides to keep Antea to himself, despite his friend and helper in getting Antea turned is not so sure about fucking over Madam Blue.  Brock is such a badass, he doesn’t care.

Meanwhile, Madam Blue needs to find a classic French beauty.  She also needs her to be turned into a complete whore.  So she gets her most debaucherous trainer, Stephen, to fix her.  He meets up with a French chick and she agrees to go with him for a fuck sesh as long as he doesn’t fuck her.  He can do whatever he wants, but he can’t go all the way.

Is that a thing?  Is it okay to say, “Yeah, let’s go fuck, but you can’t fuck me.  Do anything and everything you want, but don’t stick it in me.”  I dunno.  I feel like that’s something Meatloaf would have in lyrics but application isn’t so possible.  Okay, sure, there are lots of things two people can do for pleasure, and, yes, absolutely there has to be some consensual stuff going on, but that’s weird to set those rules and boundaries.  What makes everything here even weirder, they were strangers.  I feel like you’d be like “Yes, let’s just go all the fucking way” or “That’s a hard fucking no, creeper.”

Alright, so Brock is forced to give up Antea to Madam Blue.  You see, Madam Blue forced the info about the girl from Brock’s friend (and sort of implied bi-sexual playmate), Antonio, forcing his hand.  She was intending on cutting up Antonio if he didn’t give Antea over to her.  She realizes that Brock has made Antea fall in love with him, so Madam Blue decides she cannot be for sale and she will have to make the girl her personal lover.

I think this is meant to be the ultimate climax of the movie – no pun intended.  Brock and Antea confess their love for each other, and Madam Blue, being the spiteful, jealous bitch she is, decides she’s going make Antea hers.  Meanwhile, Brock decides he’s going to find one of Madam Blue’s girls and rape her just for his own spite against the Madam.  However, all Madam Blue’s girls want Brock so they would willingly let Brock take them.

So I guess there is something like a duality here going on – both Madam Blue and Brock are taking from each other or something?  However, some extra spice is thrown into the mix.  Max, the guy who has been ordering girls is real taken by Antea as well.  He decides to fuck her without Madam Blue unaware.  That also pisses off Brock who decides to knock the fucker out after he finishes with Antea.  Strung out on love juice (no shit, Jamie Gillis says that line and it is amazing), Antea needs Brock before she will go anywhere with him.

Unfortunately, Madam Blue catches them together and she throws Antea aside and jumps on Brock and finally has him in her clutches.  She plans on making him hers like the other men who work for her.  When she thinks she has him he shoots her.  As she dies, she slips a poison capsule in her mouth and when he agrees to her dying wish of a kiss, she poisons Brock and they die together.

The end was kind of shitty, but overall, this is a pretty decent movie to end Blue March on.  Compared to The Vixens of Kung Fu, this movie is miles ahead of it.  Talk about a complete and utter reversal of fortunes these last two weeks of the month.  What makes Oriental Blue a little extra is some of what Peonies Jong brought as Madam Blue.  She was a little extra steamy with her domineering presence.  She didn’t just command her goons and girls, but she commanded the movie as a whole.  What’s interesting is that Jong was only in movies for 1975 when she made six films.  There was a single appearance in the movie Blowdry in 1976 but after that… nothing.  There’s very little online about her, so it’s hard to say if she just retired from film or if she’s even still alive.

Well, that does it for Blue March… and blue movies for a while.  In fact, don’t count on seeing another actual adult movie on this blog for the rest of 2019.  But with me just completing looks at five sleazy adult films, and being well aware of my influences each time I write, I think this might be a good time to pay one of my biggest influences a visit.  Next week, I am going to take a look at The Cinema Snob Movie.