Following up on a movie I covered at the end of last year, Space Babes from Outer Space, let’s take a look at what’s likely its most direct influence, 1993’s Beach Babes from Beyond.

Beach Babes from Beyond comes to us from schlockmeister David DeCoteau who, quite frankly, I could have an entire spin-off blog about.  I own both this and its sequel thanks to Full Moon Features who distributes the series on DVD.  If this layered pedigree of DeCoteau and Full Moon ain’t enough for you, well…  Then the cast should also be enough to make you realize this movie is loaded with talent.  First, we have Linnea Quigley who is just a treat whenever you can see her in her prime years of the mid 80s through the mid 90s.  If that ain’t enough for ya, we have royal lineage of Joe Estevez (THE Estevez of the family), Don (who needs Patrick when you got Don) Swayze, Joey Travolta (the name speaks for itself), and the matriarchal Jaqueline Stallone.

So what do we have here?  Well, three intergalactic babes take their spaceship for a spin, but crash on the Cali coast.  To help a friend they meet here on Earth, they decide to raise money by starting up a wet and wild bikini contest!  As the back of the box says, “…and proves once and for all that the Pacific Coast Highway leads straight to hard-body heaven!”

Holy shit, this might just be the most gender-empowering movie I’ve seen this year.  So what the fuck am I waiting for?  Let’s dive in!

You know you are in for something special when you have a 90s movie with the word “Babes” in the title and it is a full screen DVD.  You just know there is no such thing as a widescreen version of this movie.  That aside, before we even get to the credits, we see Jaqueline Stallone and Don Swayze flying around in a space ship.  I guess they are the parents of the TITular Beach Babe Xena (Sara Bellomo).

But fuck off with that exposition from people who I can only assume will not be seen again for another 75 minutes, because as soon as the credits start rolling, we get to watch Xena take a shower!  But double fuck off to the shower scene because why just have one nekkid Beach Babe when you can see THREE???  Xena comes out of the shower, full topless to find her friends Luna (Tamara Landry) and Sola (Nicole Posey) picking out something to wear.  They find some hot clubbin’ clothes and talk about dudes – because girls.

Sola says she’s bored and they should go cruisin’.  She wants to go to this particular solar system that is off limits to everyone.  Xena, despite being left alone for the weekend, isn’t so sure about this idea of Sola’s to take the parents’ space wheels.  Sola, being a very progressive woman who sets her sights on something and gets it, convinces Xena to take the ship out.  Upon approach to Earth’s solar system, the girls picture their ideal guy – Sola likes them big an muscular (just like how David DeCoteau likes ’em), Luna likes the nerdy and smart kind, and Xena likes the artistic type.  However, they soon discover the ship is out of gas.

They crash land in California where Dave and Jerry are headed to hang out with Dave’s Uncle Bud (Estevez).  After learning Uncle Bud’s philosophy of not caring about anything ever and just be some hippy dippy beach bum (I’m positive that never fails), a guy in a stuffy suit delivers an eviction notice to Bud.  While he deals with that, the boys go to the beach where happenin’ shit is happening.

So after about 47 minutes of beach shenanigans, we go to the house of the rich jerkass who was trying to evict Bud, Hassler, and his partner in crime, Sally (Linnea Quigley).  He doubts her commitment to Sparkle Motion when she says she’s known Bud for a long time and doesn’t want him forced out of his home.  Hassler wants him gone in the next couple days for some sort of contest (one I can’t imagine includes naked tits).

Dave and Jerry have now buddied up with Ziggy, a local who teaches them about the California babes.  Nearby, the Beach Babes stumble upon the dudes and watch as Dave and Jerry take lessons on how to make eyes with girls.  The girls make their presence known and the boys instantly want to probe the aliens.  As you can probably guess, there are lots of “fish out of water” style jokes to be had with the girls.  But everything seems to go well as they decide to stay to have dinner with the guys at Bud’s.

Uncle Bud gets the girls drunk which causes them to come onto the boys.  This leads to a real classic Cinemax style sex scene with man-eater Sola and Ziggy that is basically only there for us to see more of Nicole Posey’s tits.

The next day, Sally is trying to talk to Bud about vacating his land.  We learn that Bud and Sally were a thing in the past.  She admits that she’s upset with Bud for him never marrying her.  Bud basically shuts down all offers because he doesn’t want to live anywhere else, and he doesn’t even want the money from leaving that he could use to get a better life.

Then it cuts to Jerry having his Cinemax style soft core porno scene with Luna.  Also, Dave and Xena are on the beach having a charming little scene as they grow closer.  It’s around this time that I realize I am likely confused.  I mean, how could I ever get confused during a Full Moon or David DeCoteau film, right?  But, alas, here I am.  Confused.  That scene with Jerry getting his dick wet and Dave falling for Xena happened at night – much like the scene with Ziggy and Sola.  But the scene that happened between the two scenes with Sally and Bud happened in bright daylight.  SO…. When did that happen?  Was that actually the following day or earlier the same day when the boys met the Beach Babes?  I can see why this movie lost the Oscar for Best Editing to Schindler’s List that year.

Several more beach shenanigans later…  (I’m beginning to think DeCoteau found a way to turn beach shenanigans into a measurement of time while filming this movie.)  They discover flyers for a bikini contest with a grand prize of $30,000.  The guys think these far out Beach Babes should enter.  When they get back to Uncle Bud’s they see his property is now condemned and set to be demolished.  Turns out, Bud needs $30K to save his property.  So the Beach Babes decide to enter the contest. 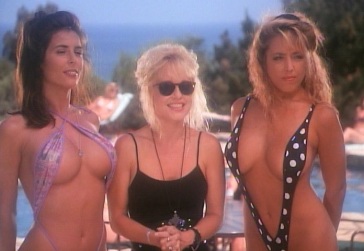 Meanwhile, Burt Ward shows up at Sally’s to be shown some swimwear or something.  Before the presentation can start, he says he wants to meet Bud because Bud was a super rad surfer and Burt Ward wants to take some lessons.  Sally uses a couple models to try to rub their tits all over the Boy Wonder to curry favor since he is judging the bikini contest.  This backfires as Ward is a good man who cannot be corrupted with dumb boobs.

Sally sees the girls trying on some swimsuits during a 5 beach shenanigans montage – see, that has now become the time measurement of this world.  Thinking they are some sort of harem for Bud, she lures Xena to her house in order to steal Xena’s bikini designs.

Woof…  That was some paragraph I just typed there, wasn’t it?

Anyway…  Sally is still in love with Bud, and, despite being told otherwise, believes Xena is his new girlfriend.  So that’s why she’s gone full villain in this movie.  Dave and Jerry find Xena tied up in Sally’s house and free her.  She decides to fuck with Sally’s bikinis.  In other news, Dave had Joey Travolta work on getting Xena rocket fuel for her spaceship.  Yeah…  I typed that too.  This makes Xena sad because that means she will have to return home soon.  So, everybody fucks one last time.

The next morning, the bikini contest starts.  Guess what this scene is entirely comprised of?

Xena wins because she technically cheated.  Remember, she fucked with Sally’s suits so it caused them to fly open during the contest, disqualifying her designs.  However, Sally and Bud get back together.  Burt Ward meets his surfing hero and Sally tells him that Bud has this amazing sun tan/sunburn cream that will be the next big thing for Burt Ward to market.  Oh yeah, that’s a thing in this movie – Bud has a concoction that made Jerry’s sunburn go away instantly.  Bud and Sally are great, the Beach Babes get their space fuel, and leave to go home promising the boys they will be back someday for them.

I feel like I undersold this movie.  I mean this was a movie that was basically a thematic, if nothing else, inspiration to one of my all-time favorite movies Space Babes from Outer Space!  However, as I said, David DeCoteau turned beach shenanigans into a unit of time.  This movie is 74 beach shenanigans long.  That basically means there ain’t much plot to get in the way of this movie.  And what plots there were, they bounced all around this movie wherever it could fit.

However, I will say that this movie is incredibly fun.  It’s dumb as all get out but in all the best possible ways.  Each of the Beach Babes are likable, the main dudes are not annoying.  Without a doubt, though, Linnea Quigley steals every scene she’s in.  She’s so playful even as the villain.  I can’t presume anything, but damn it looked like she loved making a movie like this where everything is basically a joke or played tongue-in-cheek.  I’m not deluded, this movie isn’t that inspired or all that great, but it’s hell of a lot of fun.

And for a movie that is only 74 beach shenanigans in length, you can’t complain.

So what’s coming up next week?  Well, I’ve got a stalker, slasher, exploitation type flick starring the incomparable Cameron Mitchell.  It’s a movie that has a particularly famous bathtub scene that I’m sure I will spend several Stephen King-length paragraphs talking about.  It’s The Tool Box Murders and you can read what I think right here at this site next Friday!